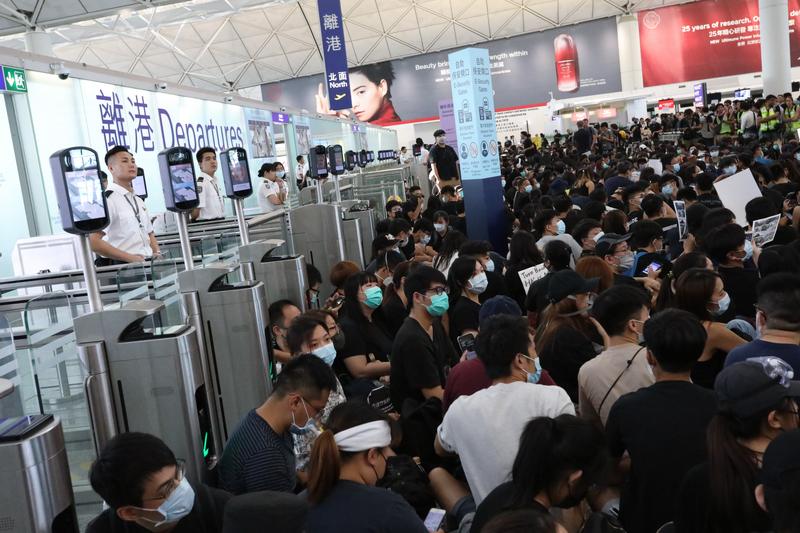 HONG KONG – Hong Kong’s airport canceled all remaining flights for the second day after protesters took over terminals in the afternoon. Citing serious disruption of airport operations, the airport authority said all departure flights had been cancelled. It advised all passengers to leave the terminal buildings as soon as possible.

In an earlier press statement Tuesday, Hong Kong International Airport said all check-in service for departure flights had been suspended since 4:30 pm.

More than 300 flights were cancelled as of 3:30 pm Tuesday as thousands of protesters occupied the airport’s main terminal for the fifth consecutive day. After filling up two separate arrivals halls, demonstrators streamed into the departure area by late afternoon despite increased security measures designed to keep them out. Passengers struggled to get past the sitting protesters and into the immigration section.

On Monday, Beijing said protests that have swept the city over the past two months have begun to show “signs of terrorism”.

Despite the airport resuming operations around 6 am after Monday’s suspension of operations, Hong Kong flag carrier Cathay Pacific said it had cancelled more than 200 flights to and out of the airport on Tuesday, according to its website. Cathay also said it had suspended with immediate effect on Tuesday a second officer operating flight CX216 for misuse of company information, and had also commenced internal disciplinary proceedings.

“The AA has noticed that there are calls online for public assembly in the airport this afternoon,” the authority said in a statement early Tuesday. “The AA will work closely with its business partners with a view to gradually resuming normal airport operations as soon as possible.” The Airport Authority Hong Kong started rescheduling flights at 6 am on Tuesday.

Secretary for Transport & Housing Frank Chan said in a press conference Monday the decision to suspend operations at Hong Kong International Airport had been made owing to concerns over aviation safety and the safety of passengers and airport staff.

Most protesters had left the airport shortly after midnight.

Cathay Pacific said it would only operate a limited number of flights for connecting passengers. Airport flight boards showed the likes of Emirates Airline and Virgin Australia had flights scheduled to depart on Tuesday.

Beijing on Monday said protests in the Asian financial hub, which started as opposition to a now suspended extradition bill, had reached a “critical juncture”.

Hong Kong is the 8th busiest by passenger traffic, handling 73 million passengers a year. The airport has been filled with anti-government protesters for five days.

A Reuters reporter saw more than 100 travelers queuing up at Cathay’s ticketing counter early on Tuesday.

A woman surnamed Chan, who is a retail store assistant at the airport, told China Daily her employer asked that the shop be closed at 2:40 pm due to safety concerns. The usual closing time is 11 pm.

She said the store saw few customers these days. Chan said it was not easy for ordinary people to make a living and she hoped protesters could take people’s livelihood into consideration first.

A tourist from Taiwan surnamed Lin was supposed to fly out of Hong Kong with her two children and an elderly relative on Monday. When interviewed by China Daily, Lin told the family’s flight was rescheduled to take off at 4:30 pm on Tuesday.

Lin said the family had spent the night at the airport and was eager to go home as soon as possible as people were worried about their safety back home in Taiwan.

“The way to handle last night was chaotic,” said Kate Flannery from Australia, who was traveling to Paris. “The airport authority didn’t deal with the situation. I felt like I was walking around and nobody gave us information.”

A Cathay customer officer at the airport, who declined to provide his name, said that nearly all of the airline’s flights were full.

The airport, one of the world’s busiest, blamed demonstrators for halting flights on Monday. The Airport Authority cancelled all outbound and inbound flights after 3:30 pm on Monday after a large number of protesters seriously hindered operations.