Singapore to ban domestic trade of ivory from 2021 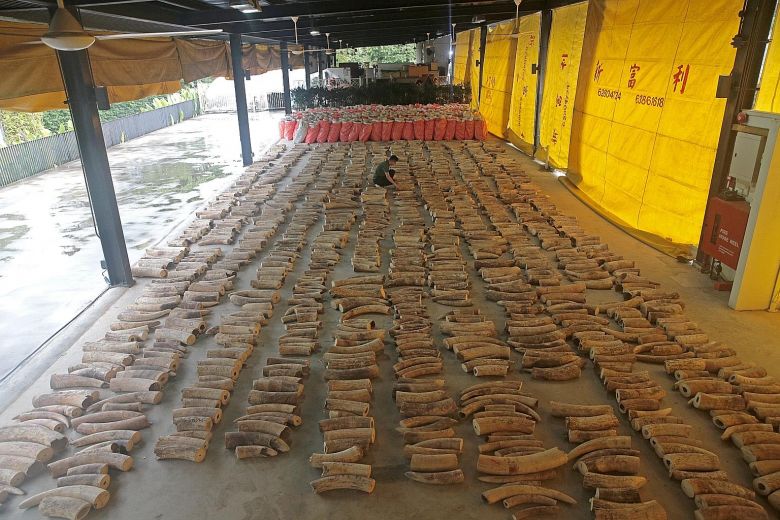 SINGAPORE — Singapore will ban the domestic trade of elephant ivory from Sept 1, 2021, according to the National Parks Board (NParks).

The sale of elephant ivory and ivory products, as well as the public display of such products for the purpose of selling them, will be prohibited here once the ban takes effect.

It closes a loophole that has enabled products that entered the market before 1990 to be sold here, which facilitates the global illicit ivory trade as recently poached ivory could masquerade as vintage ivory, according to the World Wide Fund for Nature (WWF).

Second Minister for National Development Desmond Lee said in a Facebook post that even though international trade in elephant ivory is already banned, poaching of elephants for their tusks remains a major threat to their existence.

“We’ve seized a number of illegal shipments attempting to pass through our port, on the way to other destinations. This move to ban domestic trade reinforces our commitment to curb demand for ivory and combat the illegal wildlife trade,” he added.

NParks said the ban – which it announced on World Elephant Day – highlights Singapore’s resolve in the fight against the illegal trade in species listed under the Convention on International Trade in Endangered Species of Wild Fauna and Flora (Cites). Singapore is a signatory to Cites, under which international trade in elephant ivory has been banned since 1990.

Once the ban is in effect, traders can donate their stock to institutions for educational purposes or keep them. NParks said it will continue to work with traders to ensure a smooth transition.

“Public display of elephant ivory or ivory products for educational or religious purposes will continue to be permitted. Similarly, those who own musical instruments and personal effects like bird cages that contain ivory may continue to use them in public,” it added.

“The domestic trade ban sends a strong signal to global governments and underlines the urgency to stop the illegal wildlife trade.”

Dr Sonja Luz, director of conservation, research and veterinary services at Wildlife Reserves Singapore, welcomed the ban, saying: “We strongly advocate against purchases of products that contain endangered animal parts, and this is a message we proactively share with visitors across our four parks.”

Singapore is a major transit country for the illegal wildlife trade due to its strong global connectivity.

This year alone, the authorities here seized over 37 tonnes of pangolin scales and almost nine tonnes of elephant ivory.

NParks said a public consultation on the blanket ban was conducted on government feedback portal Reach from November to December last year, and results showed that 99 per cent of the feedback received was supportive of the move.

Dr Leong Chee Chiew, its director-general for wildlife trade control, said NParks “is committed to stopping the trade of elephant ivory and its products for the conservation and protection of the world’s elephants”.

This is aligned with views shared by the community, which is similarly concerned about the impact that the ivory trade has on elephant population numbers.

NParks added that those who wish to sell their ivory and ivory products imported prior to 1990 may do so before Sept 1, 2021, after which their sale – including online sales – will be prohibited. It added that the grace period is to provide traders with time to decide what to do with their ivory stock.

Those who violate the ban may be charged under the Endangered Species (Import & Export) Act. They may be fined up to $10,000 per specimen, not exceeding $100,000 in total, and/or jailed for up to 12 months.