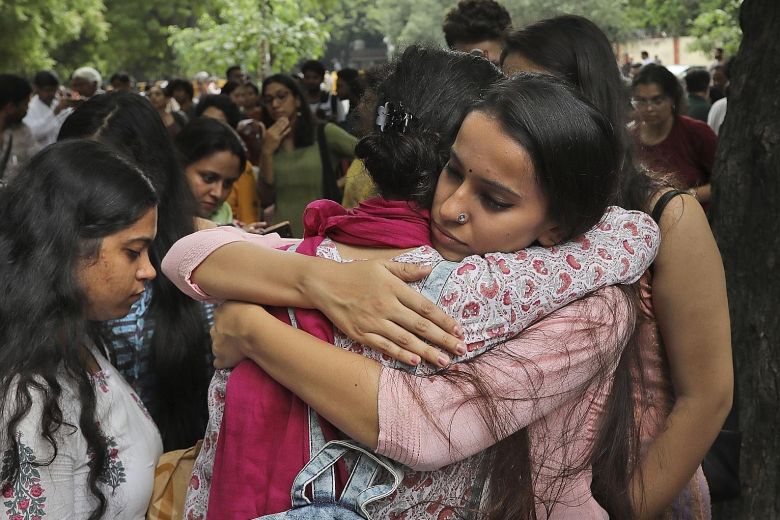 NEW DELHI — As Kashmir remained in a communications lockdown, dozens of Kashmiris and their well-wishers gathered in a corner of Jantar Mantar, a road in central Delhi, to mark the Eid al-Adha festival.

Among them was Mr Rayees Mir, who said he last spoke to his parents and grandmother in Kashmir nine days ago.

“Today is a day of celebration but I am not happy,” said Mr Mir, wiping away tears. “My parents are in Kashmir and I haven’t heard from them. I don’t know if they are all right. My grandmother lives alone. I was planning to go home for Eid but I decided not to.”

He was speaking of the Indian government stripping away the region’s special status, which included separate laws from the rest of the country.

“You have to understand the feelings of Kashmiris,” he added. “How could they do this without any discussion? I feel like an outsider.”

Dozens of people, including Kashmiris, sat in rows on dusty carpets on the side of Jantar Mantar, Delhi’s own speakers’ corner and the government’s designated protest site. They ate Eid lunch – including sweets, biryani, puri (deep-fried bread) and dal – amid news reports that Eid had passed without any violence back home.

A banner put up at the venue read “Eid away from home”, with some also speaking to the gathering of people and explaining the anguish and helplessness they felt over the developments in Kashmir.

Mr Adil Farooq Sidiqui, a Kashmir student, said the gathering was to make sure Kashmiris in the Indian capital had a place to go to amid the communications lockdown. “The message is that we shouldn’t feel alone or sad,” said Mr Sidiqui. “We can only hope the situation becomes better.”

Kashmir, which is at the heart of a conflict between India and Pakistan, was plunged into turmoil after the central government last Monday withdrew Kashmir’s special status, which guaranteed a high degree of autonomy – including a separate flag and protection of property from non-residents.

The government, in a separate move, bifurcated the state into the Union Territory of Jammu and Kashmir and Union Territory of Ladakh. The announcement of the decision was preceded by a communications lockdown, which has been in place for over a week. It includes a lockdown on the Internet, phones and even cable television.

There is also a curfew and a ban on gatherings, while dozens of political leaders and separatists have been arrested.

Government officials maintained that restrictions would be eased eventually but declined to give any timeframe, as Kashmir remained cut off from the rest of the country.

Indian Foreign Secretary Vijay Gokhale said at a briefing in New Delhi yesterday: “Yes, there are restrictions on communications… we need to bear in mind that communications are not just used by ordinary people, but also used by people who intend to create trouble in the state.

“We understand the need for people to talk to each other and for families to be reassured. Those restrictions will be eased gradually… when we feel the law and order situation improves.”

The government said the public can call family and friends from 300 points across Kashmir.

Indian media reported that Eid celebrations were muted amid the heavy security restrictions, even as the

Jammu and Kashmir government said that prayers concluded peacefully in all parts of Jammu, including a gathering of 10,000 people in Baramulla district.

The Jammu and Kashmir government said there were “some minor localised protests of a routine nature in a few places” and isolated incidents of stone pelting.

It denied reports and footage from the BBC showing large-scale protests and clashes with security forces in Soura last Friday.

The government also denied reports of food shortages and ATMs running out of money. Mr Gokhale said: “Banks and ATMs are functioning as normal. There is no shortage of cash. There is adequate food supplies and no reports of starvation.”

Developments in Kashmir have also led to a diplomatic fallout, with Pakistan downgrading diplomatic ties with India, expelling India’s high commissioner and a series of other steps curbing travel between the two countries.

Yesterday, Pakistan discontinued a bus service between Delhi and Lahore. Government sources said that the Line of Control, the de facto border between India and Pakistan, remained “stable and quiet”.