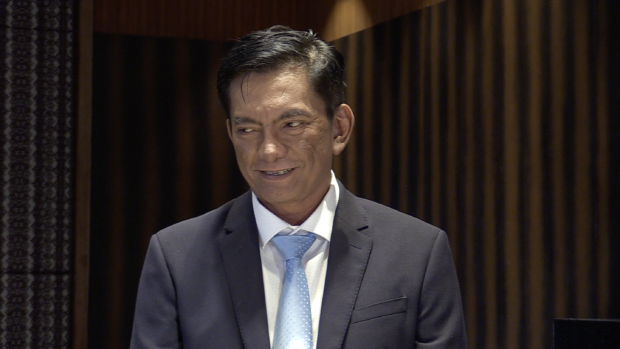 MANILA, Philippines — The House ways and means committee approved Tuesday a bill increasing the excise tax rates on alcohol products despite facing an objection during the first deliberation of the panel.

House Bill No. 1026 of Albay 2nd District Rep. Joey Salceda, committee chair, seeks to increase the excise tax on alcohol products and the indexation rate to 7 percent to account for inflation and income. The incremental revenues that will be generated once the bill is enacted into law will fund social services and infrastructure programs of the government.

Forty-three members of the ways and means committee voted in favor of the bill’s approval. HB 1026 was the version approved by the House on third and final reading during the previous 17th Congress, according to Salceda.

In moving for the adoption of HB 1026, Nueva Ecija 1st District Rep. Estrellita Suansing cited Rule 10 Section 48 of the chamber.

The provision states that: “In case of bills or resolutions that are identified as priority measures of the House, which were previously filed in the immediately preceding Congress and have already been approved on 3rd reading, the same may be disposed of as matters already reported upon the approval of majority of the Members of the committee present, there being a quorum.”

Cagayan de Oro 2nd District Rep. Rufus Rodriguez objected to the swift approval of the measure, saying returning lawmakers like him should be given a chance to scrutinize the bill. He also said all stakeholders should be heard first.

Rodriguez argued there is a “bigger constitutional right” to hear out lawmakers and stakeholders during deliberations.

“There is no equitable taxation if in this Congress the stakeholders are not heard,” Rodriguez stressed.

During the hearing, authors of various alcohol tax bills said they are pushing for higher excise tax on alcohol products to generate revenue to fund the Universal Healthcare law, to discourage alcohol consumption and to support President Rodrigo Duterte’s request during his fourth State of the Nation Address.

For simpler administration, Salceda’s bill also seeks to remove the distinction on whether fermented liquors are brewed and sold in microbreweries and pubs or in factories. The measure also seeks to simplify tax administration on distilled spirits by basing its tax rate on volume per liter instead of “per proof liter.” 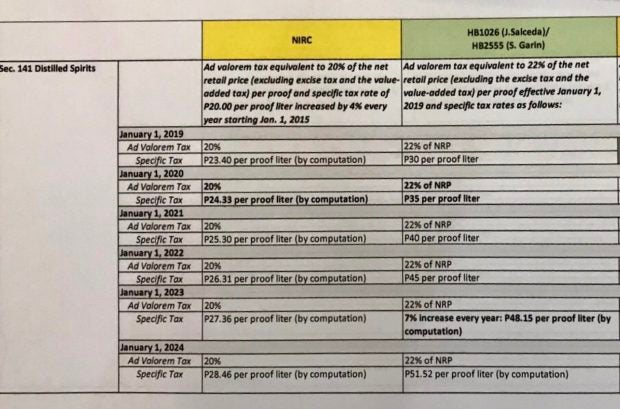 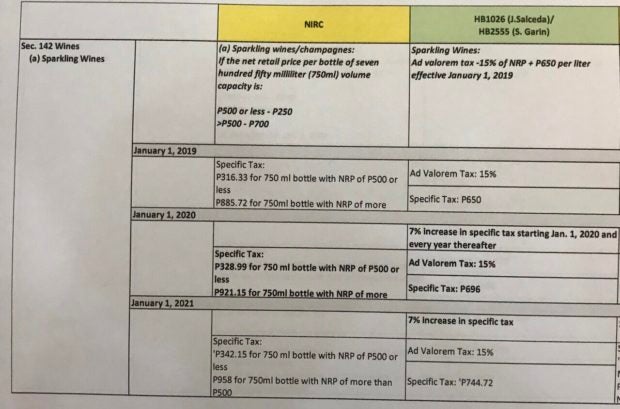 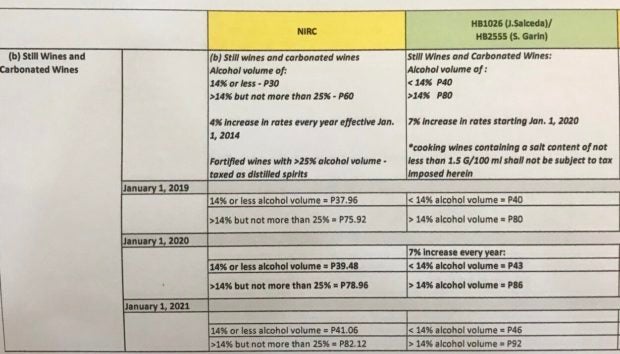 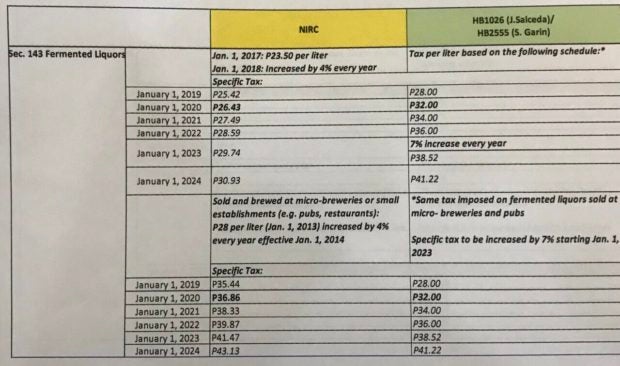 Read Next
US looks to work with new Guatemala president on migration
EDITORS' PICK
Duterte signs law giving rights, more protection to foundlings
Comelec won’t proclaim party-list groups yet
Honolulu Café is the cure for your Egg Tarts and Roastings cravings
DOJ-led panel drops 29 cases of torture, EJKs
Luxe property: A way to build, preserve wealth
House energy committee chair Arroyo bats for cheap electricity
MOST READ
Heart Evangelista gets a ‘no’ from Chiz Escudero after asking, ‘Do I deserve a bag?’
BIZ BUZZ: Flip-flopping BIR
3 Iloilo residents found with Omicron subvariant
Man posing as Marcos spox revealed to be an inmate in Bilibid — Guevarra
Don't miss out on the latest news and information.