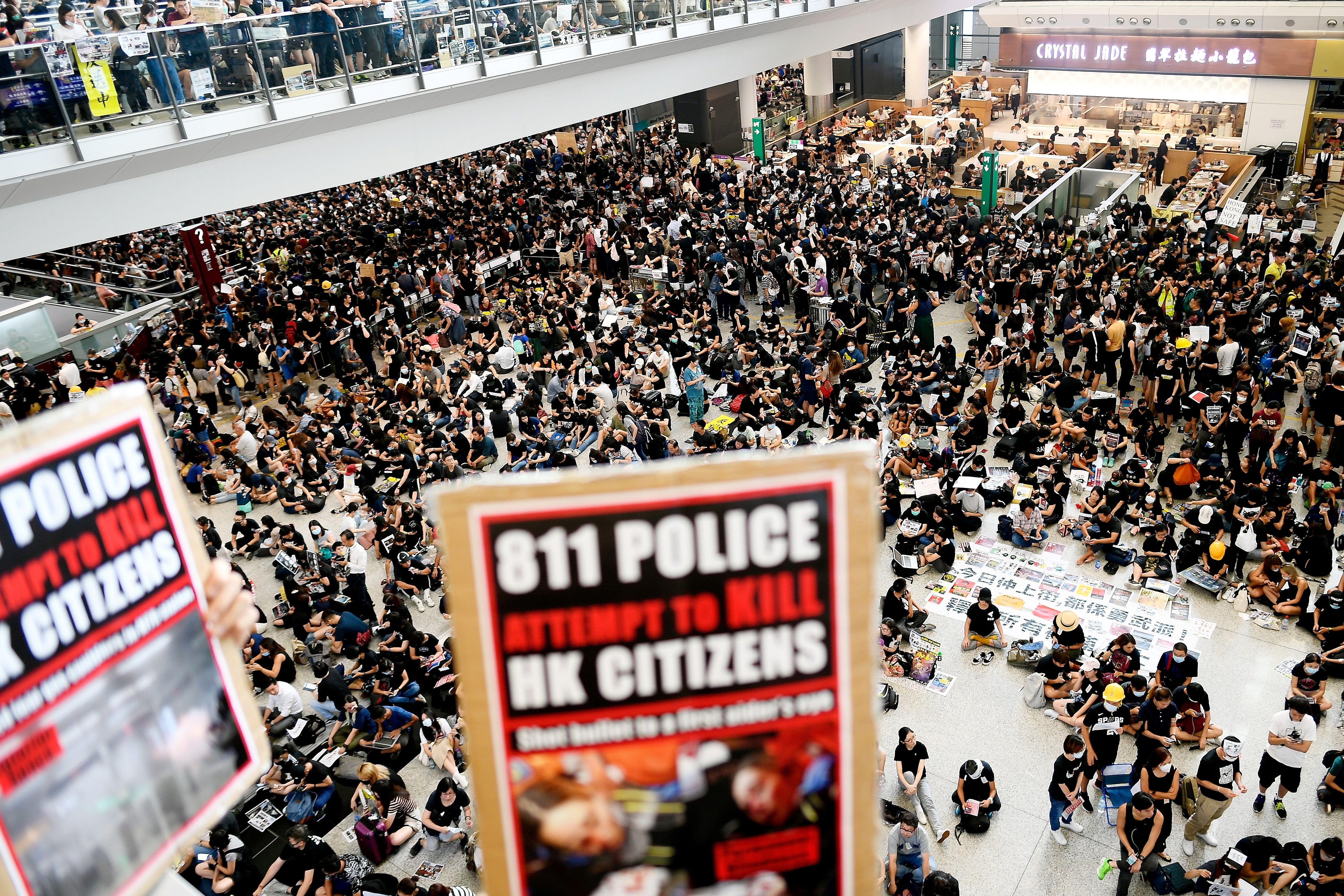 Pro-democracy protesters gather against the police brutality and the controversial extradition bill at Hong Kong’s international airport on August 12, 2019. – Hong Kong airport authorities cancelled all remaining departing and arriving flights at the major travel hub on August 12, after thousands of protesters entered the arrivals hall to stage a demonstration. (Photo by Manan VATSYAYANA / AFP)

HONG KONG — One of the world’s busiest airports was struggling to reopen Tuesday, a day after thousands of pro-democracy demonstrators crowded into Hong Kong’s main terminal and forced flight cancellations.

Passengers were checking in for flights with people who were unable to leave on Monday among those crowding the departure hall. About 200 flights had been canceled.

Protesters have shown no sign of letting up on their campaign to force Chief Executive Carrie Lam’s administration to respond to their demands. No new violence was reported, although the city is on edge after more than two months of near-daily and increasingly bloody confrontations between protesters and police.

Software engineer Joydeep Chakravarti, whose connecting flight to San Francisco was canceled late Monday, expressed frustration that he was told to leave the airport when he wanted to stay inside the terminal.

“I don’t know what’s out there, so I don’t want to leave. I didn’t make any plans for Hong Kong,” said Chakravarti, who had a carry-on bag with laptop, charger and an extra shirt while the rest of his luggage already was checked in on his Singapore Airlines flight.

A massive traffic jam soon formed on the highway leading back to Hong Kong’s city center.

Some protesters were seen walking toward the airport amid the stifling heat.

The demonstrations that have drawn more than 1 million people at times call for democratic reforms in the semi-autonomous Chinese territory and an independent inquiry into police conduct, with both protesters and police adopting ever-more extreme tactics.

On Monday, the central government in Beijing ominously characterized the protest movement as something approaching “terrorism” that posed an “existential threat” to the population.

Hong Kong was promised certain democratic rights when China took over the then-British colony in 1997, but in recent years, some have accused Beijing of steadily eroding their freedoms.  /muf