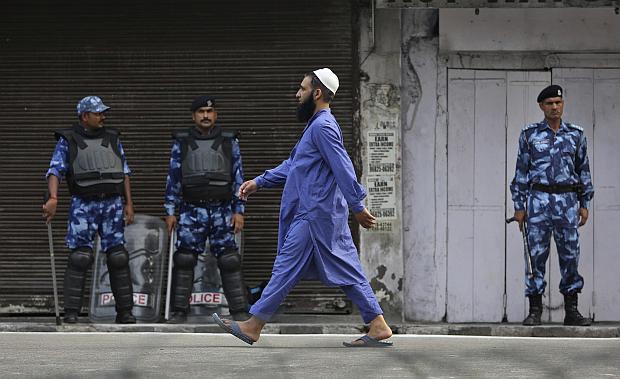 SRINAGAR, India — Troops in India-administered Kashmir allowed Muslims to walk to local mosques alone or in pairs and pray for the Eid al-Adha festival Monday during an unprecedented security lockdown that still forced most people in the disputed region to stay indoors on the Islamic holy day.

Some protesters demonstrated against the Indian government’s surprise revocation of Kashmir’s special status last week. All communications and the internet remained cut off for the eighth day. The streets were deserted, with authorities not allowing any large congregations to avoid anti-India protests.

“Our hearts are on fire,” said Habibullah Bhat, 75, who said he came to offer prayers despite his failing health. “India has thrown us into dark ages, but God is on our side and our resistance will win.”

Hundreds of worshippers hit a street in a neighborhood in Srinagar after the prayers and chanted: “We want freedom” and “Go India, Go back,” eyewitnesses said. Officials said the protest ended peacefully.

A tweet earlier by Kashmir police said Eid festival prayers “concluded peacefully in various parts of the (Kashmir) Valley. No untoward incident reported so far.” The communications shutdown meant independent verification of events in the region was limited.

India’s foreign ministry shared photos of people visiting mosques but didn’t specify where the photos were taken within Jammu and Kashmir, which New Delhi downgraded from a state to two federal territories a week ago.

The security lockdown in India’s only Muslim-majority region and is expected to last through Thursday, India’s independence day. The restrictions had been briefly eased for Friday prayers last week and for shopping ahead of Eid.

Meanwhile, Pakistan’s Foreign Minister Shah Mahmood Qureshi and opposition leader Bilawal Bhutto Zardari expressed support for people in the Indian portion of Kashmir to have the right of self-determination. Both visited the Pakistani portion of Kashmir for Eid.

India and Pakistan have fought two wars over control of Kashmir, and the first one ended in 1948 with a promise of a U.N.-sponsored referendum in the territory. It has never been held.

Qureshi urged the international community to take notice of “Indian atrocities and human rights violations in Kashmir.” He said that Islamabad was trying its best to highlight the Kashmir issue internationally and expose Indian “cruelties” in the region.

Thousands of additional troops were sent to the disputed Himalayan region before India’s Hindu nationalist-led government said last Monday that it was revoking Kashmir’s special constitutional status and downgrading its statehood.

Prime Minister Narendra Modi said in an address to the nation that the move would free the territory of “terrorism and separatism” and accused India’s archrival Pakistan of fomenting unrest.

Kashmir is divided between India and Pakistan but claimed in full by both. Rebels have been fighting Indian rule in the portion it administers for decades.

Restrictions, security lockdowns and information blackouts are nothing new for Kashmiris. The region witnessed months of clampdown during massive public uprisings against Indian rule in 2008, 2010 and 2016. However, landline phones have been cut off first time, intensifying hardships.

Frequent separatist calls for general strikes and protests too are routinely met with security lockdowns.

Kashmiris have learnt by experience to figure out ways to survive the hardships of incarceration inside their homes. Residents are also used to stockpiling essentials, a practice usually undertaken during harsh winter months when roads and communications lines often remain snapped.

Over a million residents live inside the security siege of Srinagar. The hardships, residents say, are slowly unfolding.

Residents have begun to face shortages of food and other necessities as shops remain shuttered and public movement restricted. Helpless parents have struggled to entertain their kids caged inside homes. Patients have faced shortages of prescription drugs.

Authorities say they have made cash available in ATMs so that residents can take out money to buy essentials for Eid.