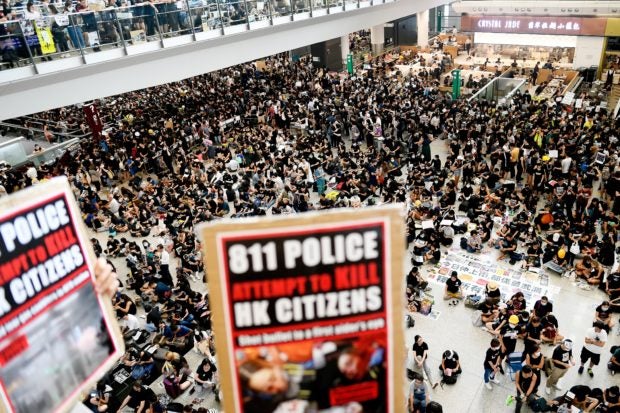 Pro-democracy protesters gather against the police brutality and the controversial extradition bill at Hong Kong’s international airport on August 12, 2019. – Hong Kong airport authorities cancelled all remaining departing and arriving flights at the major travel hub on August 12, after thousands of protesters entered the arrivals hall to stage a demonstration. (Photo by Manan VATSYAYANA / AFP)

BEIJING — China on Monday slammed violent protesters in Hong Kong who had thrown petrol bombs at police officers and linked them to “terrorism,” as Beijing ramps up its rhetoric against pro-democracy demonstrations in the financial hub.

“This wantonly tramples on Hong Kong’s rule of law and social order,” he said at a press briefing in Beijing.

Yang’s remarks came a day after thousands of pro-democracy protesters defied warnings from authorities to hit the streets for the 10th weekend in a row. 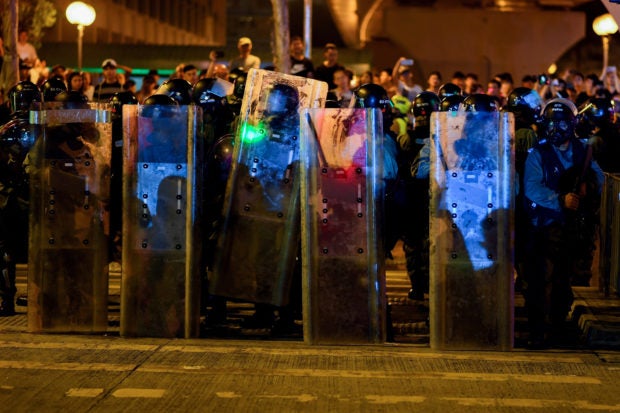 Police officers stand ready in Tsim Sha Tsui district during a demonstration against the controversial extradition bill in Hong Kong on August 11, 2019. – Police in Hong Kong fired volleys of tear gas on August 11 at thousands of pro-democracy protesters who defied warnings from authorities to hit the streets for the tenth weekend in a row. (Photo by Manan VATSYAYANA / AFP)

Hong Kong police fired volleys of tear gas Sunday at protestors after denying their requests for permits to stage a march.

But Yang focused on the violent behavior of a “tiny minority,” which he condemned as “a serious challenge to Hong Kong’s prosperity and stability.”

The two-month crisis, which was triggered by opposition to a planned extradition law, has morphed into a wider movement for democratic reform and a halt to eroding freedoms.

It is the biggest threat to Beijing’s rule of the semi-autonomous southern Chinese city since its handover from Britain in 1997 – and has drawn repeated criticism but no forceful actions yet from the central Chinese government. /kga