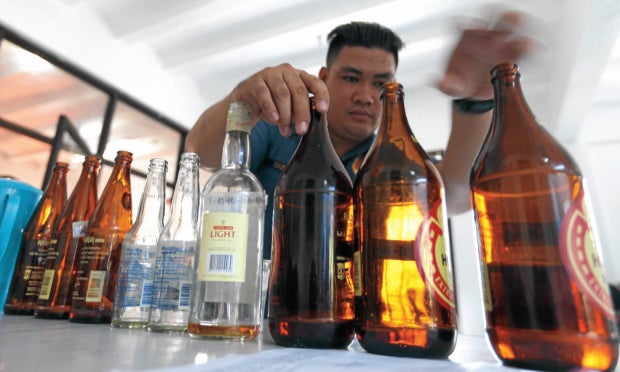 In this file photo, a police officer conducts an inventory of different kinds of liquors they confiscated as evidence for violating City Ordinance 2301 at the Masambong police station in Quezon City. INQUIRER FILE PHOTO/EDWIN BACASMAS

MANILA, Philippines — A bill banning the sale and consumption of alcohol and alcoholic beverages in all streets, pathways, plazas, alleys, sidewalks, parks, parking areas, and other public places has been filed in the House of Representatives.

Quezon 4th District Rep. Angelina D.L. Tan’s House Bill No. 3047 also prohibits the consumption of alcohol in all establishments between 12:00 midnight to 8:00 a.m., as it likewise provides penalties to violators of the proposed law.

Tan, a medical doctor and chair of the House committee on health, stressed that “alcoholism and violence have clearly become key public health issues that require urgent attention.” The lawmaker also cited the World Health Organization’s data that 3 million deaths every year could be attributed to alcohol consumption.

“This measure is a proactive response to the growing clamor of the people and President Rodrigo Roa Duterte’s commitment to curb criminality in the country by banning the consumption of beer, wine, liquor and similar intoxicating beverages in public places,” Tan pointed out in the explanatory note of the bill filed on July 23 and referred to the local government panel on August 5.

Duterte announced during his fourth State of the Nation Address that he wants a law ordering all drinking establishments to close at midnight, but presidential spokesman Salvador Panelo later clarified that the Chief Executive merely wants a ban on liquor consumption by midnight.

House Bill No. 3047 seeks to punish individuals and establishments who would violate its provisions with imprisonment of not more than three months or a fine not less than P10,000. The revocation of a license to operate may also be meted to businesses that would disobey the rules. /kga