Cow jumps out of truck on the way to slaughter 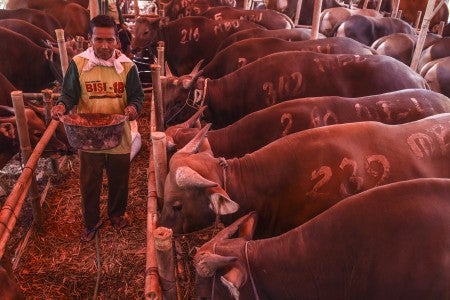 A cow vendor feeds his cows on sale for Idul Adha (Day of Sacrifice) in Jakarta on July 10, 2019. Antara/Muhammad Adimaja via The Jakarta Post/Asia News Network

JAKARTA — Every year during Idul Adha (Day of Sacrifice), livestock across the Indonesia attempt to resist being led to slaughter, with mixed results.

This year was no different, with one cow in Tangerang, Banten, jumping onto the busy road out of a pickup truck that was transporting it to its final destination, the Al-Ittihad Mosque.

“The cow jumped out of the truck and the rope [tying it] snapped because it was already frayed,” Fidin Karnalah, a member of the mosque’s sacrifice committee, said on Sunday as quoted by tribunnews.com.

Fidin and two committee members struggled to lead the cow back onto the truck on Jl. Taman Makam Pahlawan Taruna and were assisted by Tangerang Public Order Agency officers as well as local residents.

Fortunately, no one was injured in the incident.

The cow was being transported from the nearby Al-Azhom Mosque to Al-Ittihad.

“[The cow was able to jump] because the rope was not tied very securely, probably because [those who tied it] were already tired,” Fidin said. “Al-Ittihad Mosque receives a share [of sacrificial animals] from Al-Azhom Mosque.”