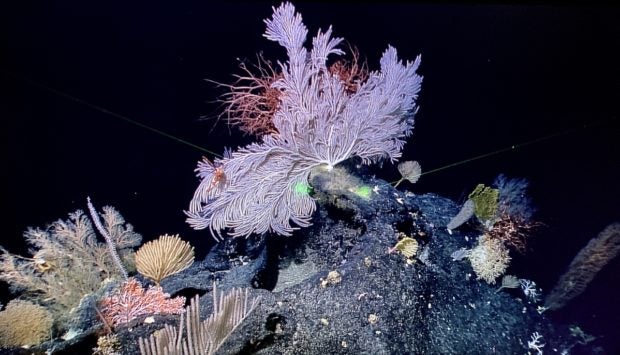 Photo taken on May 28, 2019 shows a seabed garden shot by China’s remote operated vehicle (ROV), Discovery, in a seamount in the south of the Mariana Trench. Xinhua via China Daily/Asia News Network

SYDNEY — Whether companies should be allowed to mine the seafloor is a question gaining traction as the International Seabed Authority debates the drafting of a code that could eventually lead to such commercial mining.

The first phase of the code is expected to be finalized sometime next year. But scientists, environmentalists and other concerned parties are arguing for a moratorium so more research can be carried out on the full impact of deep-sea mining.

The 168-nation International Seabed Authority says it is an autonomous international organization established under the United Nations’ Convention on the Law of the Sea, and that its aim is to organize, regulate and control all mineral-related activities in international waters.

For many years, the debate surrounding deep-sea mining was academic, since companies doubted that mining at depths in excess of 3,000 meters could be economical. However, improved technology has changed that.

Impetus for deep-sea mining has been growing in recent years as the global demand for copper, cobalt, nickel, silver, manganese and rare earths and specialty metals increases, driven by the growth of renewable energy technologies. A number of these metals are used in rechargeable batteries, solar photovoltaic generators and wind power plants.

This combination of perceived economic viability and technological feasibility has spurred a surge of interest-by countries as well as private companies-in exploring the ocean floors for mineral resources.

There is widespread concern, however, about the impact that seabed mining would have on the ecosystems and habitats of the deep, and how the practice could be managed.

The practice is still at an early stage. Consequently, the nature and extent of its impacts on deep-sea ecosystems remain unknown. But existing information has led scientists to warn that biodiversity loss would be inevitable and likely irreversible. If seabed mining were permitted, the activity could directly affect tens of thousands of square kilometers of seabed in abyssal plain areas and potentially release toxic chemicals and vast plumes of sediment.

Even if the International Seabed Authority reaches an agreement, it could take years or even decades to become law.

The authority has granted 29 exploration contracts covering more than 1.3 million square kilometers of seabed in the Pacific, Indian and Atlantic oceans. Some of the contracts are due to expire in 2021.

Scientists say more assessments must be done that bring together science, conservation, industry and regulators to help write and evaluate the rules for extractive industries before mining takes off.

The destructive potential extends beyond the loss of species, according to a recent editorial in the science journal Nature. It said the use of tractor-sized machines, each weighing around 300 metric tons, could release carbon locked up in deep-sea sediment into the atmosphere, worsening climate change.

Craig Smith, an oceanographer at the University of Hawaii, has speculated that seabed mining “will probably have the largest footprint of any single human activity on the planet”.

As Smith and others point out, scientific knowledge of the seafloor is scant.

Mining the ocean floor is seen as the last frontier. In the 1970s, oil and natural gas companies moved offshore.

The frozen continent of Antarctica is known to house rich deposits of minerals such as iron ore. But following the signing of the Protocol on Environmental Protection (the Madrid Protocol) in 1991, that agreement came into force in January 1998, banning mining in Antarctica indefinitely.

Deep sea oil and gas production has not been without its challenges or disasters. The Deepwater Horizon oil rig explosion in 2010 is perhaps the best known.

The oil well was about 1,500 meters below the rig when the explosion occurred, killing 11 workers. It took 87 days to cap the well, but in that time 3.19 million barrels of oil had leaked into the Gulf of Mexico and washed up along the Louisiana coastline 42 km away, creating an economic and environmental catastrophe.

The International Seabed Authority says it has the right to set the rules, since it is a transparent public forum of consensus-building by the international community and in compliance with international law. But the question is whether we really need to have the seabed ripped open by mining in the first place.