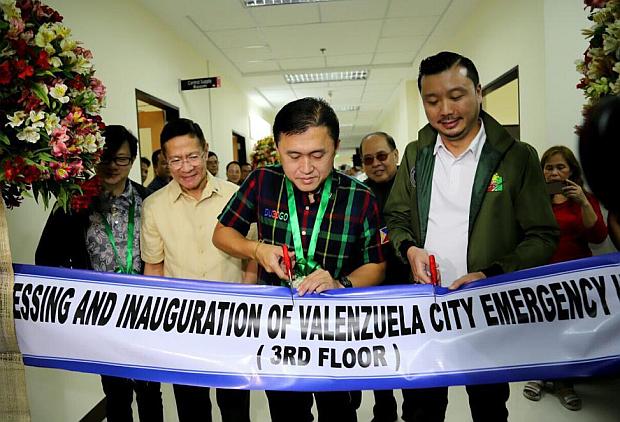 MANILA, Philippines — Sen. Christopher Lawrence “Bong” Go attended on Friday, Aug. 9, the launching of the Malasakit Center at the Valenzuela City Emergency Hospital — the 17th in Luzon and the 40th nationwide.

The event was led by Secretary Michael Lloyd Dino of the Office of Presidential Assistant for the Visayas (OPAV) and City Mayor Rex Gatchalian. Also attending was Health Secretary Francisco Duque III.

OPAV was a partner of the Office of the Special Assistant to the President in establishing earlier Malasakit Centers when Go was still with the executive branch.

In his speech, Go recounted how his vision of providing quick access to affordable quality healthcare to all Filipinos through Malasakit Centers came into fruition.

[This Malasakit Center started when I, your Kuya Bong, was still Special Assistant to the President. I proposed this to the President because in my 20 years of serving him I saw how big a problem it was for Filipinos whenever a family member gets sick.]

[My office is for you because it is using the people’s money. I’m just returning to you what you have entrusted to the government.]

To extend the reach of these one-stop health care centers, Go vowed to institutionalize them through his proposed Senate Bill No. 199, also known as the Malasakit Center Act of 2019, so that their operations would continue even beyond the Duterte administration.

“The Malasakit Centers have helped thousands of Filipinos, and I will make sure that they will be able to help so many more,” Go said.

“The first bill that I filed in the Senate aims to institutionalize Malasakit Centers. This means that if passed into law, the Malasakit Centers will have a bigger and regular budget every year and their operations will continue regardless of who is seated in Malacañang,” he added.

Valenzuela City 1st District Rep. Weslie Gatchalian, who was also present during the ceremony, said that he had filed a counterpart Malasakit Center bill in the House, House Bill No. 2309, which requires PhilHealth to establish, operate and maintain these centers in all public hospitals.

Currently, there are 11 Malasakit Center-related bills filed in the House to complement the Universal Health Care Act, which was signed into law last year.

In an ambush interview, Go was aksed how many Malasakit Centers the government aims to build nationwide.

[There’s no limit. That’s why I filed a bill that will institutionalize the centers, mandating not just DOH [Department of Health]-run public hospitals to set up Malasakit Centers but also provincial and city hospitals.]

Curtailing the spread of dengue

Go was also asked about measures to curtail the rising number of dengue cases nationwide.

He advised the public to observe the Enhanced 4S strategy of the DOH to mitigate the epidemic.

[There are Malasakit Centers that will also help those suffering from dengue.]

The Enhanced 4-S campaign stands for the following:

[We need the cooperation of all Filipino, especially now that there are many cases of dengue because of the rainy season.]

Asked about the possible revival of the controversial Dengvaxia program, Go said that experts should prove first that the would be 100-percent safe to regain public public.

[For me, the Food and Drug Administration and experts should prove that Dengvaxia is safe. Let them show up in public and get themselves injected with the vaccine so that Filipinos will lose their fear.]

Go also shared with the Valenzuela residents some the following bills related to improving health care in the country:

the Advanced Nursing Education Act of 2019, which seeks to improve nursing education (SB No. 395)

the Barangay Health Workers Act of 2019, which seeks to ensure that each barangay will have enough health workers (SB No. 392)

a measure to expand the coverage of the Mandatory Basic Immunization Program (SB No. 398)

As someone who travels across the country regularly to aid victims of disasters such as earthquakes and typhoons, Go also vows to diminish the incidences of fatalities in these tragedies as he filed a bill pushing for the creation of an executive department for disaster resilience (SB No. 205).

This will then be complemented by another measure which seeks to institutionalize an emergency medical services system nationwide (SB No. 394), similar to the Central 911 system of Davao City.

Finally, Go also filed a bill to promote the welfare of health care professionals by pushing for an increase in the salaries of government civilian personnel (SB No. 200).

During the event, Go emphasized his commitment and dedication to improving government services for all Filipinos.

[I am your voice in the Senate. So I want to personally hear your problems. You can expect us to continue our service for the benefit of every Filipino.]