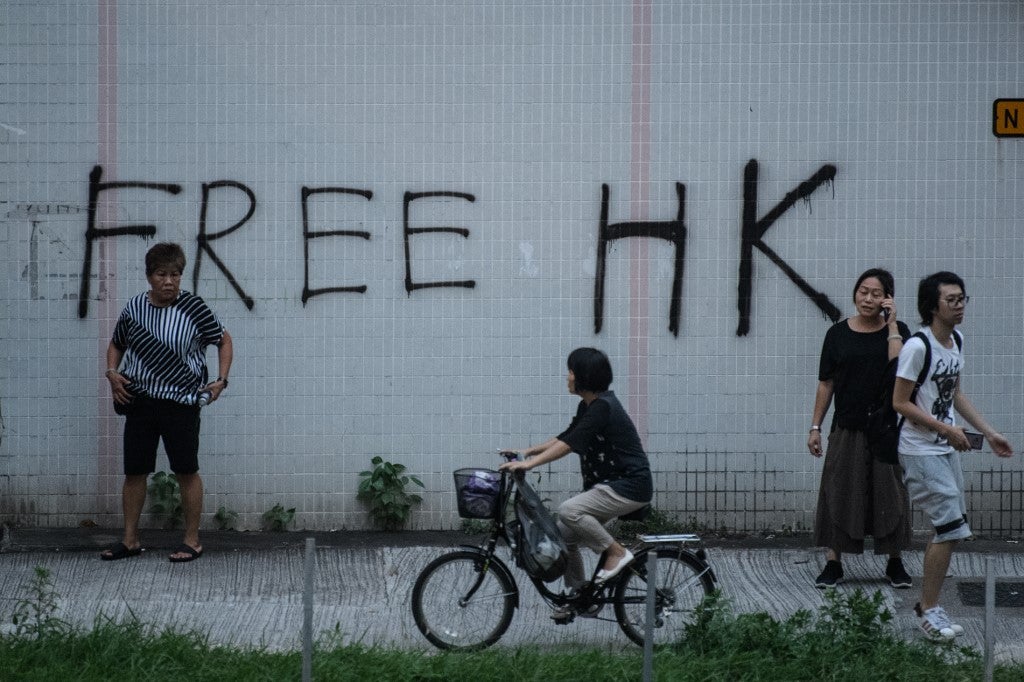 A cyclist rides past graffiti that reads “Free HK” in the Tai Wai area of Hong Kong on August 10, 2019, as protesters take part in demonstrations against a controversial extradition bill. – Police in Hong Kong fired tear gas on August 10, 2019 at pro-democracy protesters who defied orders to cancel a rally and blocked intersections across the city in “hit-and-run” demonstrations. The new protests came after the city’s leader warned she would grant no concessions to the demonstrators, whose movement is now in its third month. (Photo by Anthony WALLACE / AFP)

BEIJING — China warned Britain to stop “meddling” in Hong Kong, after a top British official called the international financial hub’s leader to voice concern about protests that have rocked the city for two months.

The pro-democracy protests, which are partly fuelled by widespread anger at an erosion of liberties in Hong Kong, have become the biggest threat to Beijing’s rule of the semi-autonomous southern Chinese city since its handover from the British in 1997.

On Friday, British Foreign Secretary Dominic Raab had a call with Hong Kong leader Carrie Lam, where he emphasised the need for a “fully independent investigation into recent events”, according to Britain’s foreign ministry — prompting a furious response from Beijing.

Beijing has increasingly pitched the anti-government protests in the semi-autonomous region as funded by the West, but has provided little evidence beyond supportive statements from some Western politicians.

Last week, the Chinese government slammed Washignton after reports emerged that some US diplomats based in Hong Kong had met with pro-democracy activists.

The Chinese foreign ministry urged the US to “immediately make a clean break with various anti-China rioters” and “stop interfering in Hong Kong’s affairs immediately”.

Tensions are high in the Asian financial hub after two months of protests and clashes triggered by opposition to a planned extradition law that quickly evolved into a wider movement for democratic reforms.

Last week, the city witnessed a rare general strike and the most widespread unrest in two months of demonstrations — with police firing 800 rounds of tear gas in a single day at a dozen locations.

A total of 420 people have been arrested since rallies began on June 9, according to Hong Kong police in early August.