BEIJING – A powerful typhoon left at least 28 people dead in southeastern China, after a landslide backed up a river that broke through debris and inundated homes, state media reported Sunday. 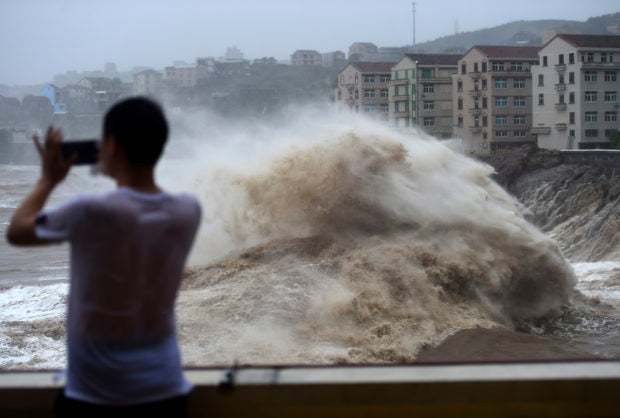 In this Aug. 9, 2019, photo released by Xinhua News Agency, a man uses his mobile phone to record waves crashing on the shore as typhoon Lekima approaches the Shitang Township of Wenling City in eastern China’s Zhejiang Province. Typhoon Lekima stuck the coast south of Shanghai, knocking down houses and trees. (Han Chuanhao/Xinhua via AP)

The deaths occurred in Yongjia county on the outskirts of Wenzhou, a major port city. The river blocked by a landslide rose to a level of 10 meters (30 feet) within 10 minutes, trapping 120 villagers, Xinhua said.

More than 1 million people were evacuated before the storm struck, including 253,000 in Shanghai.

Shanghai Disneyland was closed, as were some popular tourist areas along the riverfront in the city’s historic Bund district.

“Of course, it’s a little disappointing, but it’s because of the weather so we can all understand, right. This is a natural disaster, isn’t it?” said Wang Chunguang, who was visiting from Jiangsu province north of Shanghai.

CCTV said 3,023 airline flights in Shanghai, Hangzhou and other cities and some train services were canceled. Authorities in Shanghai also shut down the high-speed magnetic levitation train to Pudong International Airport.