Amid calls for accountability as prompted by a state audit report on error-filled textbooks worth P254 million, the Department of Education (DepEd) sought to explain the findings of the report as a question of procedure.

Some of the findings by the Commission on Audit (COA) in its 2018 report stemmed from the “late updating of consolidated reports and reconciliation of voluminous records with implementing units,” the DepEd said in a statement on Friday.

“The DepEd assures that most of the accounts have already been reconciled while some are just completing documentation, hence, these are not yet liquidated,” the agency also said.

In its report, COA called out the department on its “error-filled” learning materials worth P254 million for Grade 3 instruction in the subjects of araling panlipunan, science and English.

It also noted that about a quarter of the materials worth P113.71 million, which were procured as buffer stock from 2014 to 2017, have remained unused as of last year.

“Regarding the large number of learning materials procured, they already allocated the materials and there is already an approved Activity Request and is in the process of releasing the buffer materials to the lower units,” the DepEd said.

“The DepEd Management assured that they will revisit the existing DepEd guidelines on the procurement of instructional materials and will evaluate the controls on buffer stocks.”

The statement did not directly address the issue of the error-riddled textbooks.

Antonio Calipjo Go, the self-styled “sick books crusader” and academic supervisor of Marian School of Quezon City, described the COA report as a vindication of his 24-year advocacy. 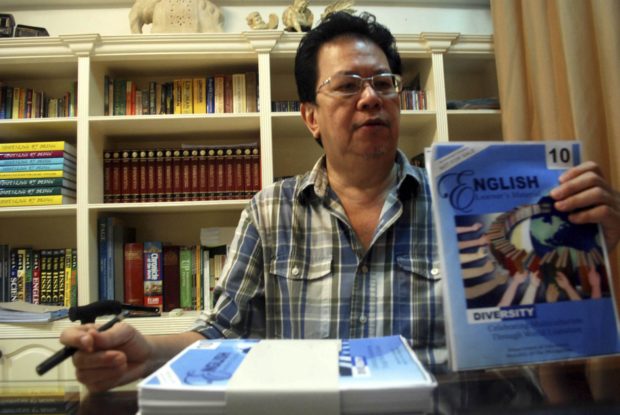 “I have already questioned why the Department of Education has not been flagged by the Commission on Audit regarding these errors. So the COA findings vindicate me after 24 years,” he said.

Go, who started his scrutiny of public school textbooks for factual and grammatical errors in 1995, said he had taken out advertisements in newspapers now amounting to over P1 million just to call the DepEd’s attention.

In response, he said, the DepEd sued him for libel and slander.

“In 24 years, no one has come up to refute them,” Go said of his corrections.

“The government should put up a body, an independent commission, since this function should not be within the DepEd,” he said, adding that the National Book Development Board could potentially be that agency.

Go also cited the DepEd practice of putting up its teachers in expensive hotels or resorts to write learning materials in one to two weeks as the reason behind the poor quality of their materials.

Sanctions should be imposed on those who wrote the error-filled materials, as well as those who allowed their release without proper editing, Go said.

“There is a crime, so there should be a punishment,” he said.

Also on Friday, Sen. Sonny Angara called for an inquiry into the DepEd’s failure to distribute the textbooks and other materials.

Sen. Sherwin Gatchalian said the Senate committee on basic education, which he chairs, “will do everything to exert accountability. We will make sure that hard-earned taxpayer money will never go to waste and corruption.”

The Alliance of Concerned Teachers (ACT) also joined the chorus of DepEd critics.

“For every peso that the DepEd expends irresponsibly, there are students and teachers who bear the brunt of this imprudence. This is plainly unacceptable and those responsible should be held liable for this,” ACT chair Joselyn Martinez said.

The COA’s reports on fund mismanagement in key government agencies, such as PhilHealth, the Department of Health and the DepEd, “only show that the government has the resources to grant substantial pay hike and improve the delivery of basic services to the people,” Martinez said. —WITH A REPORT FROM LEILA B. SALAVERRIA

Read Next
DOH: Dengue cases highest in five years
EDITORS' PICK
Climate advocates among first to cheer new US president
CHEd steps into UP-DND row over ‘problematic’ accord, to broker talks
Lacson advises vaccine czar to ‘watch his back’
Acer Philippines welcomes you to its first flagship store
New Year, New Rediscoveries
Is your company a growth champion? Stand up and be recognized!
MOST READ
Biden admin’s immigration policies to benefit Filipinos — Amb. Romualdez
PET questions Calida interest in private case
Lacson advises vaccine czar to ‘watch his back’
Age restriction relaxed in MGCQ areas: From 15-65 to 10-65
Don't miss out on the latest news and information.