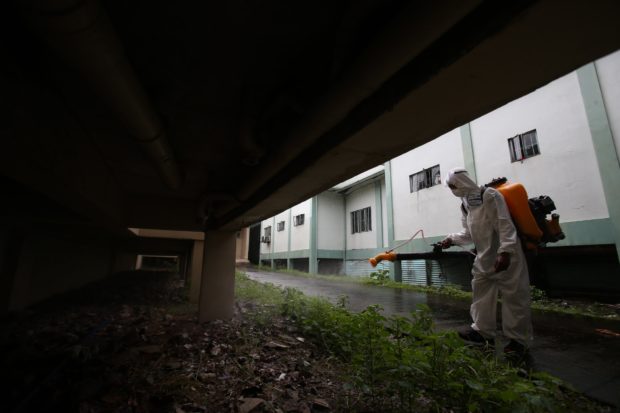 The “highest” incidence of dengue over the last five years is upon us, the Department of Health (DOH) warned on Friday, noting that 10 regions now face an epidemic of the mosquito-borne disease while two others have breached their alert threshold.

Health Undersecretary Rolando Enrique Domingo said that dengue cases across the country continued to rise as more than 21,000 new cases had been recorded since the last reporting period.

As of July 27, there were 167,606 dengue cases nationwide, with 661 deaths, the “highest” the country has seen in the last five years, Domingo said.

On Tuesday, the DOH declared a national dengue epidemic when it noted that from January to July 20 this year, the number of dengue cases had spiked to 146,062, with 622 deaths.

As of Friday, Domingo said that three more regions were added to the list of provinces facing a dengue epidemic: Central Visayas, Soccsksargen and the Bangsamoro Autonomous Region in Muslim Mindanao. Two other regions—Ilocos and the National Capital Region—
have already exceeded the alert threshold.

Domingo warned that the number of dengue cases was expected to rise since the peak season of the disease was only starting, and “can even extend until November.”

The epidemic has prompted several doctors’ and patients’ groups to call on the government to reconsider its ban on the dengue vaccine, Dengvaxia.

The Food and Drug Administration (FDA) revoked the vaccine’s certificate of product registration earlier this year when it failed to submit documentary evidence to prove its safety and efficacy for public use.

“We are not asking that the vaccine be used in mass vaccination programs or even that government be forced to spend for it. All we are asking is that the FDA lift the ban, so that it can be made available to patients who have already been infected [by the virus],” said Dr. Minguita Padilla, coconvener of Doctors for Truth and Public Welfare.

Domingo said Health Secretary Francisco Duque III might come out with a decision on pharmaceutical firm Sanofi Pasteur’s appeal for the government to reconsider its ban on the vaccine not later than Aug. 19.

Dengue has claimed 21 lives in the Davao region from January to August 5 this year, a 50-percent rise from the 14 deaths reported in the same period last year, according to DOH data released on Thursday.

At least 11 or about half of the total deaths caused by dengue were in Davao City, which also recorded the highest number of cases in the region for the period, Health Assistant Secretary Abdullah Dumama told reporters in a briefing.

Councilor Mary Joselle Villafuerte, chair of the city council committee on health, however, said there was no need to declare a state of calamity in Davao City just yet, as the number of dengue cases in the area was still below the alert and epidemic levels.

Antonietta Ebol, DOH Davao dengue program coordinator, said the agency had been replenishing medical supplies weekly as the demand for the rapid test kits for dengue has risen.

“We have about 10,000 test kits and provide these kits to Davao City and the other five provinces weekly. Despite the high demand, supplies are coming in,” Ebol said.

The DOH monitored a total of 4,345 dengue cases in the region from January to early part of August this year, a 61.5-percent increase from the 2,690 cases monitored in the same period last year.

In Zamboanga City, the City Health Office monitored 23 deaths due to dengue from January to August 6 this year, nearly double the 14 dengue deaths from the previous year.

A total of 4,186 dengue cases have been reported in the city, a 373-percent increase from the 884 cases seen in the same period last year.

Dumama said the DOH would tap the quick response fund (QRF) to address dengue-related emergencies, but that local government units would have to declare a dengue epidemic to make use of it.

“Hospitals and [the DOH] regions that ran out of budget can now request for the QRF [to address dengue],” Dumama said.

He also appealed to the public to help curb the epidemic by following the DOH’s advice on dengue prevention and control.

Miravite blamed the rain and drought for contributing to the spike in the number of dengue cases.

Drought in the early part of January until May forced residents to store water, which might have served as the breeding ground for dengue-carrying mosquitoes, she said.

On rainy days, the breeding grounds expanded and mosquitoes thrived in foliages, unattended pools and vases. —WITH A REPORT FROM JULIANNE SUAREZ AND JULIE ALIPALA