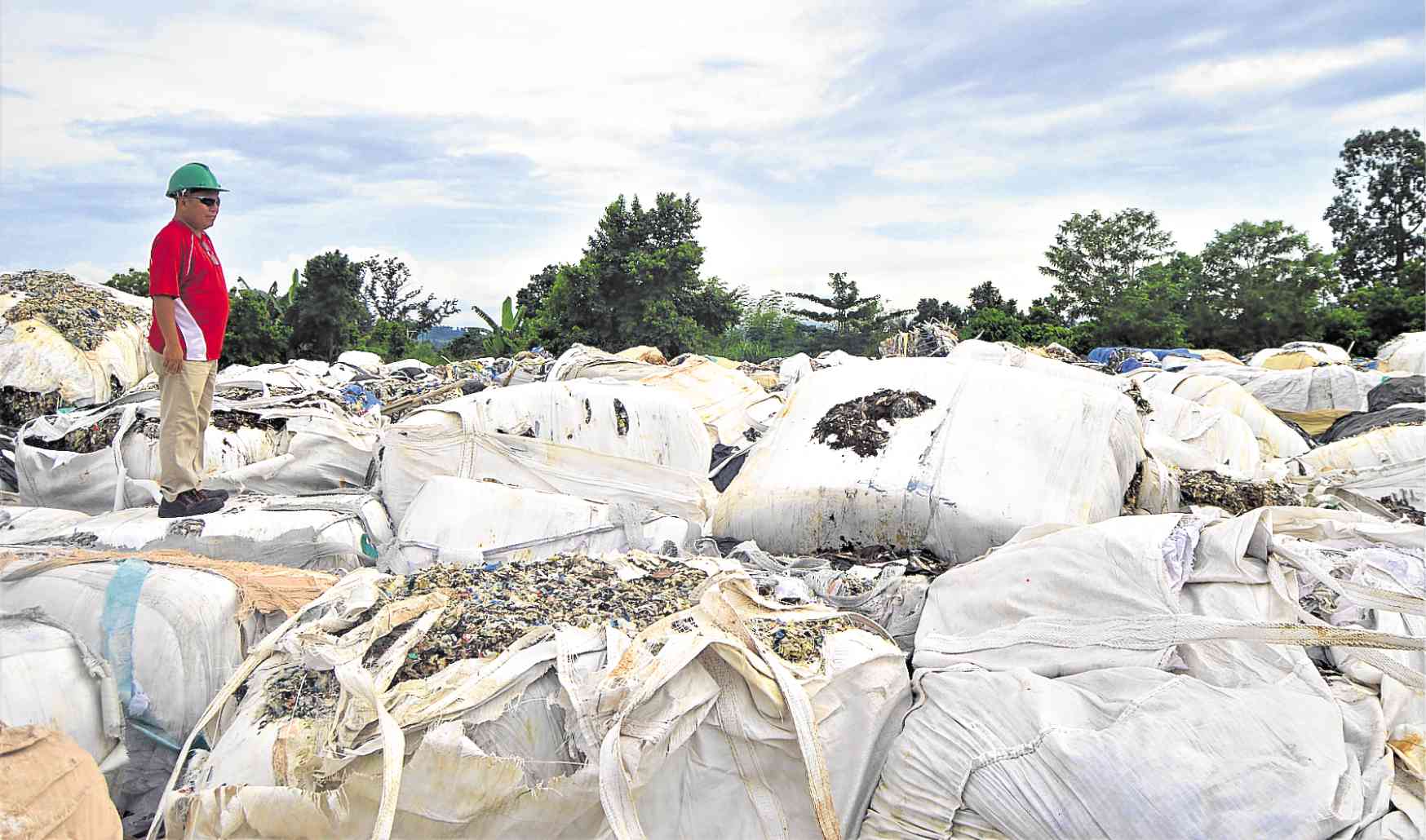 MISDECLARED SHIPMENT Customs officials are preparing the reexportation of the pile of mostly plastic trash that was imported from South Korea and stored at Phividec Industrial Estate facility in Tagoloan, Misamis Oriental. —JIGGER J. JERUSALEM

CAGAYAN DE ORO CITY—The remaining 5,177 metric tons of mostly plastic garbage from South Korea that arrived in Misamis Oriental province last year would be sent back to that country soon, a Bureau of Customs (BOC) official here said on Thursday.

But John Simon, Mindanao Container Terminal subport collector, said the BOC Northern Mindanao regional office had yet to be advised of the schedule for the reshipment.

“We are awaiting the vessel from Korea. The announcement is forthcoming,” Simon said in a text message to the Inquirer.

He said the amount that would be spent for the reexportation of the garbage had to be approved by the Korean National Assembly, details of which had not yet been divulged to reporters.

This developed as the environment watchdog EcoWaste Coalition said the South Korean government had informed the group that the garbage would be returned in September.

The Korean Embassy in Manila sent a letter to EcoWaste on Aug. 6, informing the group that “relevant Korean authorities” had already been discussing the details with the BOC for the repatriation of the garbage.

“We will have to wait for the results of the discussion but it seems that the waste is expected to be returned to Korea in September 2019,” the South Korean Embassy was quoted by EcoWaste in a statement released on Thursday.

The embassy’s announcement was in answer to the letter sent by EcoWaste to the South Korean president on Aug. 2.

“We welcome this important piece of information from the South Korean Embassy, which is a good indication that the overstaying waste will be gone soon and will not suffer the same fate as the infamous garbage from Canada that sailed back to its source after six years, following a diplomatic crisis,” Aileen Lucero, EcoWaste Coalition national coordinator, said in the statement.

“We hope the vessel that will bring the illegal waste exports back to South Korea will be identified and dispatched sooner as [these are] ready to be picked up anytime,” she added.

Earlier declared by the BOC as “misdeclared (shipment), heterogeneous and injurious to public health,” the imported garbage has been stored at the compound of consignee Verde Soko Philippines Industrial Corp. inside the Phividec Industrial Estate in Tagoloan, Misamis Oriental, since July last year.

Verde Soko said the trash was intended as materials for its recycling facility.

The company did not push through with its operation after the BOC red-flagged the misdeclared garbage while the Department of Environment and Natural Resources (DENR) said Verde Soko failed to secure an environment permit.

Earlier, nearly 1,400 tons of mixed plastic waste in containers, which formed part of the trash imported by Verde Soko, were sent back by the BOC to the port of Pyeongtaek in South Korea.