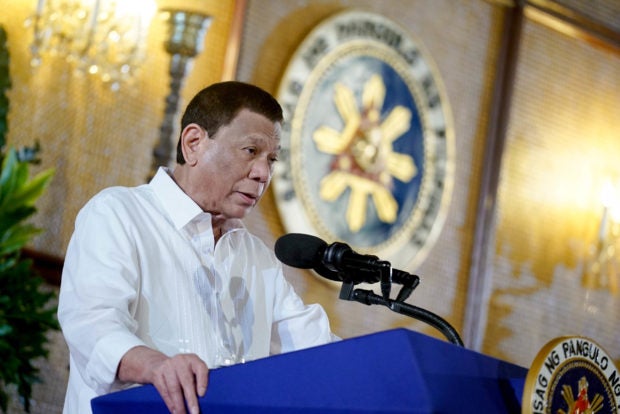 MANILA, Philippines — President Rodrigo Duterte on Friday backed police and military generals who own Small Town Lottery (STL) franchises from the Philippine Charity Sweepstakes Office (PCSO), saying nothing wrong with that as long as they are complying with the law.

“Let me say this to you now. The allegation that police generals, retired, are into the STL, lotto and whatnot, I said: ‘You do not have a problem with me.’ If it’s a bidding, you participate as long it is not rigged in your favor and you secure it complying with the laws, I will not begrudge you,” Duterte said in his speech during the 118th Police Service Anniversary at Camp Crame in Quezon City.

“If you have friends who are millionaires and would finance a corporation and you’re incorporator, I don’t see any reason why you should not be in that business,” he added.

The President said there was nothing wrong for police and military generals owning STL franchises as long as it’s legal.

“Ang hinihingi ko lang naman is walang gapangan and no oppression or pressure. And if there’s a bidding and you win it, by all means,” he said.

“But as — part of your honor, delicadeza, ask yourself to be assigned somewhere where you are not operating or a participant or an incorporator of a corporation doing business in your area,” he added.

He told the police and military that for delicadeza, they should be reassigned to areas they do not have STL franchises

“Ayan lang naman delicadeza ‘yan eh. Pangit kasi tingnan na ikaw ang chief of police diyan. You look for somewhere else. The Philippine is too big. And — well of course, I never really like gambling. I don’t gamble,” he said.

“It is gambling. I said I do not gamble. But in the first place, I do not like it. But there’s a law which allows it, then my only advice to you is lumayo ka muna or you invest in some other province,” he said.

“Do not oppress your competitors as they will shout foul and then you will drag me into the picture. Kung malinis lang ang negosyo ninyo, if it’s clean, you don’t deprive the government of money due to the country and the people, okay sa akin,” he added.

Sen. Panfilo Lacson, a former Philippine National Police chief, earlier said police and military generals have cornered STL franchises from PCSO and they are among those who have not been remitting the government’s share of the earnings. /jpv