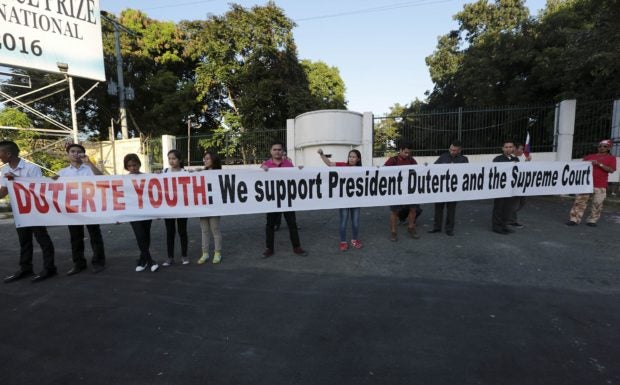 Poll watchdog group Kontra Daya on Thursday said the Commission on Elections (Comelec) should disqualify not just Ronald Cardema from taking a seat in the House of Representatives but also his proadministration group, Duterte Youth, for making a mockery of the party list system.

“Ronald Cardema and the Duterte Youth are making yet another mockery of the party list system and another blatant circumvention of the law,” Kontra Daya convener Danilo Arao said.

He was referring to Duterte Youth’s filing a new list of nominees that included Cardema as its first nominee to the House a day after the Comelec disqualified the former National Youth Commission chief for misrepresenting his qualifications.

On Monday, the Comelec disqualified Cardema from representing a youth sector group in the House because he was already 34 years old. The Party List System Act requires a youth sector representative to be 25 to 30 years old on Election Day.

“Notice that the new second nominee is his wife Ducielle who withdrew her nomination as first nominee to be replaced by him two months ago. Now she wants to be second nominee because the first nominee, Ronald Cardema, was recently declared ineligible by the Comelec First Division as Duterte Youth party list nominee, making her a probable party list representative,” Arao said.

“The party list system cannot be [the] Cardema couple’s enterprise and, for this reason alone, the Comelec should disqualify outright the Duterte Youth as a party list group,” he said.

Emilio Marañon III, one of the lawyers for the petitioners against Cardema, also found Duterte Youth’s new filing irregular.

“This is again a clear attempt to circumvent Section 8 of RA No. 7941 (Party List System Act), which expressly prohibits the ‘alteration of the order of nominees’ after it has been submitted to the Comelec. This substitution is yet another mockery of the party list system, of the Comelec and of the general public and, thus, should not be allowed by the [full commission],” Marañon said in a statement.

According to him, the new filing was meant to secure the congressional seat for Cardema’s wife should his disqualification be affirmed by the full commission.

“This new ploy exposes the depravity of Duterte Youth and its corporate officers, and fortifies our previous position that their registration should be canceled,” Marañon said.

He said the petitioners would make the appropriate filings in the coming days.

The Comelec said it was ready to accept petitions for the cancellation of the registration of Duterte Youth.

Election Commissioner Rowena Guanzon said she did not intend to initiate a motion that would result in Duterte Youth getting delisted in future elections.

Cardema can appeal his disqualification to the full Comelec and all the way to the Supreme Court.

But pending this case, the Comelec has decided not to issue him a certificate of proclamation. Without the certificate, he cannot sit as a member of the House.