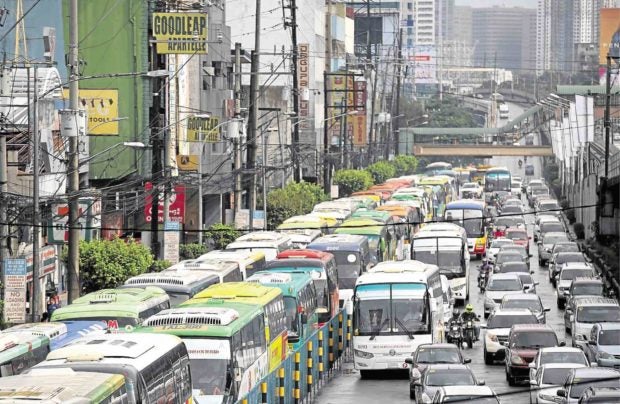 PATIENCE, PLEASE Motorists and commuters must be a little more patient, according to presidential spokesperson Salvador Panelo, as the MMDA is doing all it can to alleviate the traffic problem. —Lyn Rillon

After a “not successful” first day, the dry run of the Edsa ban on provincial buses has been put on hold for now by the Metropolitan Manila Development Authority (MMDA).

MMDA spokesperson Celine Pialago announced this on Thursday, the second day of the pilot test of its newest traffic policy that should have seen provincial buses ending their trip at interim terminals either in Valenzuela City, Parañaque City or Santa Rosa, Laguna.

She stressed, however, that the MMDA would continue to strictly enforce the decades-old yellow lane policy for city buses on Edsa.

Only around 5 percent of the 2,736 affected provincial buses joined the first day of the dry run, which pushed through on Wednesday despite an injunction issued by the Quezon City Regional Trial Court.

Based on the MMDA’s monitoring, 136 provincial buses ended their trips in the interim terminals. But since participation was voluntary, some of them pulled out later in the day due to the lack of passengers.

Even a Malacañang official has complained about the worsening traffic on Edsa in recent days due to the strict implementation of the yellow lane policy for city buses.

However, presidential spokesperson Salvador Panelo appealed to both motorists and commuters to be more patient, saying the MMDA was doing its best to address the problem.

“It took me two hours from one place in Makati going to the celebration in the Singapore Embassy,” he said in a press briefing on Thursday.

But Panelo pointed out that the intermittent rains in Metro Manila could have also “contributed to the density of traffic.”

The MMDA, however, denied that it was to blame for the heavier traffic flow on Edsa in the past few days as it pointed at “unruly” city buses.

Unlike provincial buses, city buses are banned from using flyovers and underpasses on the busy thoroughfare.

Bong Nebrija, the MMDA’s Edsa traffic chief, said that bottlenecks would result when some city bus drivers would insist on leaving the yellow lane.

MMDA chair Danny Lim agreed with his assessment, saying, “We already dedicated the yellow lanes for the city buses but there are some drivers who are hard-headed.”

Asked if the MMDA would continue the strict enforcement of the yellow lane policy, he replied: “Yes, every day, it will be implemented.” —WITH JULIE M. AURELIO