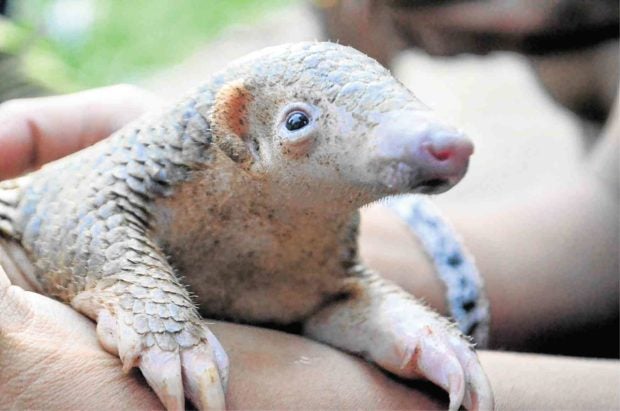 FRAGILE The Philippine pangolin, which is endemic to Palawan province, is among the most trafficked animals in the country, with its scales and meat fetching thousands of pesos in the underground market. GREGG YAN/CONTRIBUTOR

SAN PEDRO CITY—The three men recently convicted by a Tagaytay City court of violating the wildlife protection law for smuggling 10 Philippine pangolins out of Palawan province have filed a petition for probation to avoid imprisonment.

The Parole and Probation Office, under the Department of Justice, in Tagaytay City has yet to grant the petition for probation but Jorlan Torrequinada, Victor Equiza and Simfroso Salazar had already been released from detention after posting a P20,000 bail each in July.

On July 18, the defense’s counsel filed the petition for probation in Tagaytay’s Parole and Probation Office, the same day Judge Liezl Rosario Mendoza of the Tagaytay Municipal Trial Court in Cities Branch 1 convicted the three men for violating the Wildlife Resources Conservation and Protection Act.

They were sentenced to three months of imprisonment and asked to pay a P20,000 fine each.

“They could use that [bail] for their temporary liberty, pending the approval of their petition for probation,” Eduardo Lamorena Jr., Tagaytay parole and probation chief, said in a telephone interview on Thursday.

According to Lamorena, the minimum probation period is six months to a year but not more than six years.

He said the three needed not to be in detention “but should they escape then they would be outlawed [or] considered ‘wanted’ [by authorities].”

Court records showed that Salazar, a driver from Calatagan, Batangas, posted bail on July 1, while Torrequinada on July 15 and Equiza on July 18.

The case, being the first successful conviction of wildlife traffickers from Palawan, was a win for the environment, but this also renewed calls to impose stiffer penalties on offenders.

To conservationist Emerson Sy, president of the Philippine Center for Terrestrial and Aquatic Research (PCTAR), it was no more than a “slap on the wrist.”

The three men were arrested when their van was flagged at a road checkpoint on June 28. They were transporting 10 pangolins (Manis culionensis) smuggled out of Palawan for illegal trade in Metro Manila.

The pangolins, a rare and gentle mammal, fetched steep prices for its scales and meat used for traditional medicine or exotic dishes.

The Department of Environment and Natural Resources rescue center eventually released the three surviving pangolins, considered as “vulnerable” species, to their natural habitat.

Lamorena said Salazar had already reported to their office last week, but they were having problems with Torrequinada and Equiza.

“One of them is from Palawan, the other from Bicol—I’m just not sure which is which. But both live far from here and it will be quite expensive for them to travel back [to Cavite],” he said.

Lamorena said his office would coordinate the case with probation officers in the provinces to evaluate and later on handle the case.

“This is a special law, and normally penalties less than six years of imprisonment are probationable,” Lamorena said.

Under Republic Act No. 9147, illegal wildlife “collection, hunting and possession” has a penalty of two to four years imprisonment and a fine of P30,000 to P300,000 but the court gave weight to the respondents’ admission to the crime.

Should they comply with the probation requirements, Lamorena said the probation officer would immediately clear them of any criminal record.