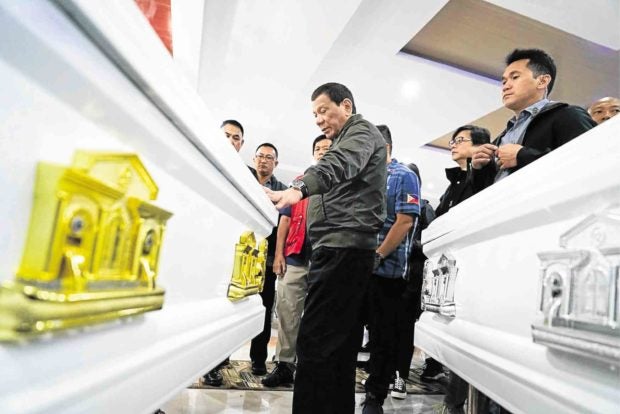 SYMPATHY President Duterte went to Iloilo City on Wednesday to condole with the families of victims of the accidents in Iloilo Strait. Thirty-one people died when three boats capsized in the waters between Guimaras and Iloilo provinces on Aug. 3. MALACAÑANG PHOTO

JORDAN, GUIMARAS—Transportation Secretary Arthur Tugade has relieved six officials of the Philippine Coast Guard and the Maritime Industry Authority (Marina) pending results of a “comprehensive and very objective” investigation on the sinking of three boats in Iloilo Strait that killed 31 people last week.

Tugade, who visited the wake of eight fatalities here on Wednesday, told reporters that the investigation would look into the possible “environmental, structural, policy and other reasons” for the accidents.

He declined to give details, saying he did not want to preempt the investigation of what was considered by Guimaras residents as the worst sea tragedy in the province in recent memory.

Motorboats Chi-Chi and Keziah first capsized at 12:45 p.m. on Saturday while sailing to this town from Iloilo City. The motorboat Jenny Vince also capsized at 3:30 p.m. while on its way to Iloilo City from Buenavista town in Guimaras.

The Coast Guard has come under fire for allowing the third boat, the Jenny Vince, to sail after two boats had already capsized in the waters separating Iloilo and Guimaras provinces.

Survivors said the Jenny Vince’s trip was delayed by bad weather, but the boat was eventually allowed to leave port when conditions improved.

Twenty of the fatalities were passengers of the Jenny Vince while 11 were from the Chi-Chi.

Tugade said protocols would be reviewed as well as the type of motorboats ferrying passengers between the Guimaras and Iloilo.

Asked when is the suspension of passenger motorboats, the main form of transportation between Iloilo and Guimaras would be lifted, Tugade said this would depend on weather and sea conditions.

But he said the wooden hull motorboats, like the capsized boats, should be phased out and replaced with those with aluminum or fiberglass hulls.

Tugade said he had scrapped the policy giving passengers a choice on whether to wear or hold life jackets since the wearing of these should be “automatic” before passengers are allowed to board the boat.

The party list groups Bayan Muna, Gabriela and Kabataan on Tuesday filed a resolution urging the House committee on disaster management to conduct an investigation of the tragedy.

“The repeated occurrence of marine incidents, such as the Iloilo-Guimaras sea mishap is emblematic of a deeper, systemic problem that confronts our transportation sector,” the proposed resolution read.