Man rescued from cave in Cambodia after four days 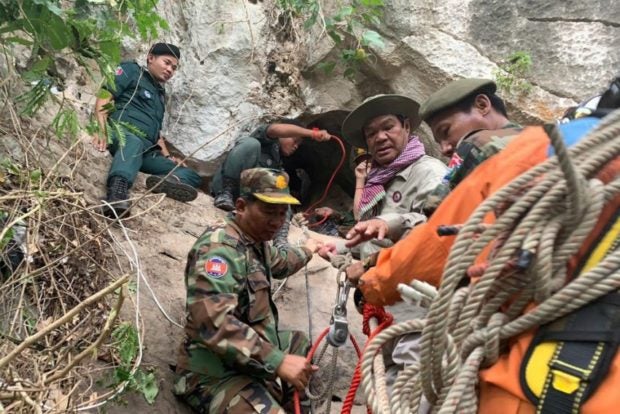 A man trapped after falling into a Battambang cave while collecting bat guano was finally freed on Wednesday after four days, by a 200-strong rescue team.

PHNOM PENH — A man trapped for four days after falling into a Battambang cave while collecting bat guano (bat dung)was finally freed on Wednesday by a 200-strong rescue team.

Sin Bora did not suffer serious injuries after falling into the cave on Chakrei Mountain in Phnom Proek district’s Baraing Thleak commune. Sao Ratana, the deputy police chief of Phnom Proek district told The Post on Wednesday that the 27-year-old resident of Teuk Thla village in Sampov Loun district’s Angkor Ban commune said he was hungry and tired after having not eaten during his three-night, four-day ordeal.

“At the scene, the victim was able to speak to authorities. He was conscious and told us that he was out collecting bat droppings as usual when he fell into the cave.

“He tried shouting for help but there was no one around,” Ratana said.

He said the rescue operation was launched when authorities were alerted to the man’s disappearance by his mother after he had failed to return home for four days.

Authorities and locals mounted a search for him, with villagers finding him trapped in the cave on Chakrei Mountain.

Ratana said authorities drilled a narrow opening into the cave from below in order to widen it enough for a man to be able to crawl through.

He said the rescue attempt was difficult as access to the opening was narrow, and the mountain rock hard and difficult to drill into. Members of Bora’s family could not be contacted for comment on Wednesday.

But hismother told authorities that Bora rarely told her where he was going and it was not unusual for him to go missing for days, with her often looking for him.

Kun Kim, the first deputy chair of the National Committee for Disaster Management, who was part of the emergency mission, told Fresh News on Wednesday that he had requested a rescue team from Unit 711 of

the Royal Cambodian Armed Forces’ Brigade 70, with police at all levels helping to save Bora.

The Unit 711 rescue team raced to the scene to save the stricken guano collector, Kim said. Bat guano can be a lucrative business, with a 10kg bag selling for 25,000 riel ($6.25). Nearly 2.5 to three tonnes of guano is collected a month by members of the tourist hotspot Phnom Sampov Bat Cave Community in Battambang province’s Banan district, community chief Dam Chhang told The Post last month.

However, members of the community are calling for action to protect the local bat population, with numbers having dwindled from six million in 1999 to around a million today.

Authorities and locals have been called on to take measures against people hunting the bats, forcing them from their habitats in the area’s mountains.

Roeut Savorn, a member of the recently established community, said there were approximately five to six million bats living in six bat caves in Banan district in 1999. But there were now only around one million left.

Twenty years ago, bats lived in six caves in Banan district, three in Phnom Sampov, two in Phnom Krapeu and one in Phnom Banan.

Now, only two caves in Phnom Sampov are home to bat populations – one in the north of the mountain and one in the east, Chhang said.