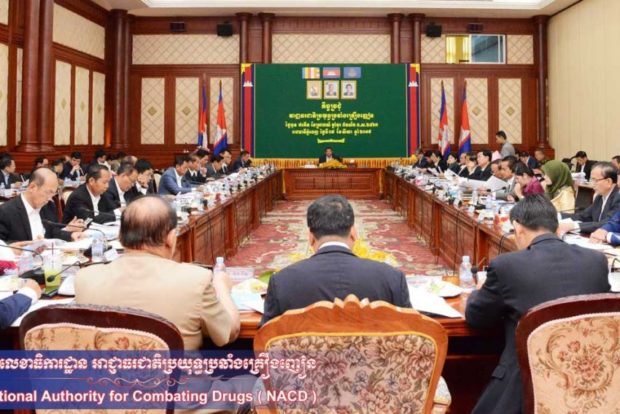 The National Authority for Combating Drugs (NACD ) holds a meeting at the Ministry of Interior on Wednesday to discuss its report on drug crimes in the first six months of this year. NACD via The Phnom Penh Post/Asia News Network

PHNOM PENH — In the first six months of this year, Cambodia’s anti-drug police cracked down on 4,175 drugs cases – an increase of nine percent on the same period last year. It also detained 8,911 people which is up 17 percent, and seized 341kg of illegal drugs – a 135 percent increase – said a National Authority for Combating Drugs (NACD) report released on Wednesday.

Of these, 4,795 were involved in trafficking or keeping drugs and 4,112 were detained for drug use.

The 341kg of drugs confiscated is an increase of 196kg in the same period last year.

“Through collaboration and the rapid exchange of information with neighbouring countries and national and international organisations, the police were able to prevent and crack down on a wide range of crimes.

“The government’s fight against illicit drugs has had a positive effect on overall crime, especially criminal offences,” the report said.

It said the launch of a large-scale crackdown on drug offences at clubs and entertainment venues had offered a wealth of experience in the domestic narcotics and drug trafficking market.

“This is real evidence of the government’s commitment to law enforcement and the support of the Cambodian people,” the report said.

Speaking at a meeting at the Ministry of Interior on Wednesday to review and debate the report and set goals for the second half of the year, NACD president and Deputy Prime Minister Ke Kim Yan said the anti-drugs authorities had been highly active and accomplished significant results.

“The responsible implementation of the ‘safe village-commune policy’ has reduced the drug problem as well as tackling other offenses, including theft and burglary,” he said.

However, Kim Yan expressed concern that illicit drug use had continued to rise, especially the growing and use of cannabis and the widespread trafficking and use of new types of illegal drugs which can damage the nervous system.

“The increase means the crackdowns have not been aimed at the right targets, especially major drug crimes, so the number of drug crimes continues to grow. Therefore, the police must have strategies to take down major drug dealers,” he said.

On July 17, Minister of Interior Sar Kheng instructed the authorities not to let up in their efforts to combat drugs. “In general, people welcome the anti-drug strategy, but we cannot relax.

“We must renew our determination to fight against drugs and combat their distribution and use at clubs,” he said.