A man rescued a dog that was left hanging from a power box by an electrical cord tied around its neck, at the side of an overpass in Missouri, United States.

David Fredman was on his way to work when he saw the dog hanging over the side of a power box, as per Fox 4 KC, last Monday, Aug. 5. 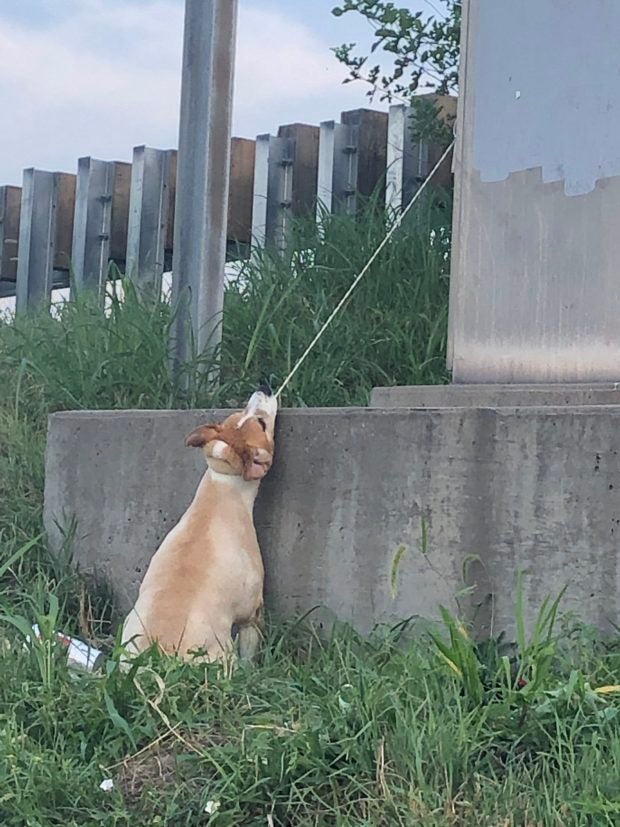 The dog, Max, hanging from the electrical box by a cord tied around his neck. Image: Twitter/@DavidFredman2

He immediately called the emergency hotline 911 before he used his knife to free the animal.

“As soon as I cut him down, he couldn’t breathe,” Fredman was quoted as saying. “He was trying to breathe. I tried get him to walk. He couldn’t walk.”

Fredman said the electrical cord was “definitely strangling him.”

Fredman then took the dog to KC Pet Project, an animal shelter. The shelter discovered that the dog, named Max, had a microchip. Max’s owner had apparently been trying to find him since the morning of the same day, after he disappeared from about a mile away.

“Two hours later there was a phone call came in asking if I was missing my dog,” Dee Vaughn, Max’s owner, was quoted as saying.

Vaughn said it was impossible that Max, who struggles to walk, could have gotten to where Fredman found him on his own. He was also shocked to see photos of the situation Max was in.

“Literally you could see the imprint around his neck where they hung him,” Vaughn said.

It is unclear as to how Max ended up by the power box, but Vaughn hopes nearby surveillance cameras will be able to determine what happened.

“From the way it looks somebody could have definitely [done this] on purpose,” Fredman said. “They could have strung him up like that.”

Fredman took to social media days after to share his thoughts on the rescue.

“It was my Honor to save Max the dog the other day. I hope out of any publicity it just makes people more humble. Makes people want to stop and help [an] animal or person in need. We should all help each other in one way or the other,” he said via Twitter today.

It was my Honor to save Max the dog the other day. I hope out of any publicity it just makes people more humble. Makes people want to stop and help a animal or person in need. We should all help each other in one way or the other.

He also shared photos from the rescue. One shows how Max was tied up when Fredman found him. Ryan Arcadio/JB