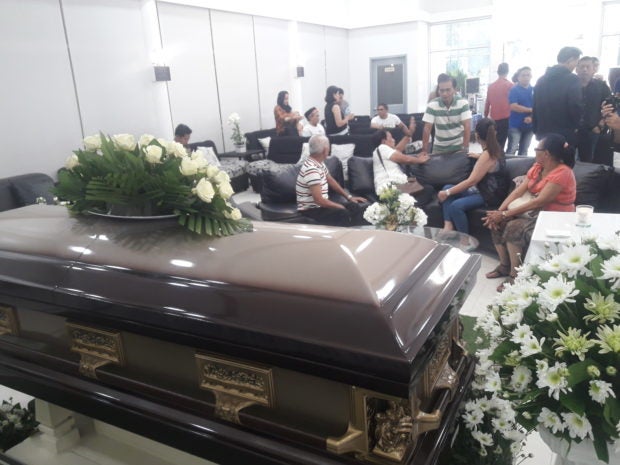 CLOSURE. A cadaver of a woman (inside the brown casket) found floating in the river near the house of former Iligan City Mayor Franklin Quijano in June 29 is laid at a funeral chapel in Iligan City. The Quijanos believe it was Salma after dental examination results matched her dental record. Photo by Divina M. Suson / INQUIRER Mindanao

ILIGAN CITY— “We were all looking for closure, now we found it.”

This was how former Iligan City Mayor Franklin M. Quijano described the end to a month-long frenzied search for his wife, Salma Theresa, who went missing around 10:30 a.m. on June 27.

On Thursday, August 8, relatives and friends joined the Quijano family in laying to rest Salma, also known as Titatit.

Quijano had said that Salma left “no clue nor trail” when she was gone, making the search for her difficult.

However, it took until July 31 for his family and authorities to conclude that the dead woman they first saw on the morning of June 29 was Salma.

Salma’s dental records were crucial in unearthing that fact, putting closure to the case, as far as the Quijanos are concerned.

“Even as we say there may now be closure, our feelings are resisting, our minds are arguing against it … We now realize that closure, even as it is a conclusion, is painful,” Quijano said.

On June 29, two days after Salma went missing, a dead woman was found floating in Mandulog River, just several meters from the Gerona Compound in Barangay Hinaplanon, where the Quijanos live with Salma’s siblings.

When retrieved, the body was already bloated and unrecognizable.

“The impression we got was it was not her as it did not resemble her, even remotely,” Quijano recalled.

He also recalled that “not one of us ever remembered her having a rash guard as well as tattered jeans” which were worn by the dead woman.

As the search for Salma continued, Quijano said they took serious note of “even the sketchiest tip” so that their probe could advance.

Quijano had mobilized the help of friends to scour the possible places where Salma would go like hotels, retreat houses, to no avail.

The family has ruled out kidnapping as there were no indications of it, said Quijano’s younger brother Roberto.

“We always ended up facing a blank wall,” Quijano noted, leading the family to “retrace our steps to square one.”

Hence, they requested authorities to take a second look at the dead woman they saw a month back, which was already buried as nobody claimed the body.

On July 29, the remains were exhumed and a government doctor examined it the following day.

Later, Salma’s dentist confirmed that the dental filling procedure previously performed on her matched that of the dead woman, Quijano further said.

A family member also recalled that Salma bought a rash guard while in Palawan sometime this year.

To ensure greater certainty, the family decided to have a DNA test, the results of which are not yet available.

But the dental and other clues seemed enough for Quijano and his children, although he said they were not preventing anyone from doing their investigation.

A police probe has established that Salma died of drowning and ruled out any hints of foul play.

Quijano cited a scene-of-the-crime report indicating “there were no bruises, no wounds and that her skin was intact,” which means there were no signs of violence inflicted on her. 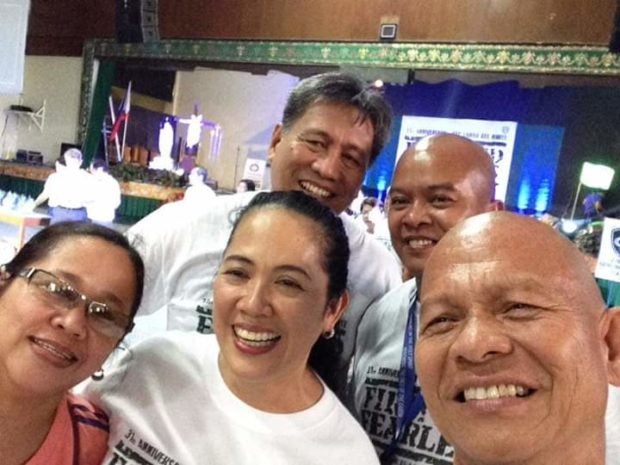 HAPPY DAYS. In this photo, Salma Theresa Gerona-Quijano (center) is seen with former Iligan City Mayor Franklin Quijano (at her back) and their colleagues of the Couples for Christ during the organization’s 31st anniversary in July 2017. Facebook photo from Ana Merlyn Encarnado

Quijano said Salma, 52, had anxieties “as she was experiencing her menopausal blues.”

“She had hot flashes as well as other pains and symptoms that usually accompanies menopause, including vertigo,” he disclosed.

Quijano said their last moment was the usual banter and jokes. “She was in a happy mood.”

The couple last saw each other on June 26, just before Quijano went off to Tagoloan, Misamis Oriental, where he holds office as Administrator and Chief Operating Officer of Phividec Industrial Authority, a government-owned corporation that runs a 3,000-hectare economic zone, one of the country’s biggest.

On July 28, 2017, their 27th wedding anniversary, Salma joined Quijano, an economist, and lawyer, in a ceremony at the Phividec office as he took over its reins after being appointed by President Duterte.

Salma last communicated with Quijano around 10:40 a.m. on June 26, through a text message. He was able to check on her late afternoon, en route to the airport to fly to Manila.

Quijano said when he called her, the phone just rang.

So, he called up their children for them “to tell their Mama that we may not be able to talk (on the phone)” that night.

Quijano was about to board the plane, and he estimated that by the time he reached Manila, Salma would already be asleep as she usually went to bed at 7 p.m.

The next day, it was their youngest daughter who last saw Salma; she embraced her mother before going to school.

Quijano remembered calling Salma at noon but her phone did not ring.

Read Next
Comelec files criminal case vs 2 Muntinlupa election officers
EDITORS' PICK
Pre-order the new vivo Y20s [G] to get a free TWS earphone
Philippines, US to begin 2-week joint ‘Balikatan’ exercises on Monday
Metro Manila to have shortened curfew hours from 8 p.m. to 5 a.m. under MECQ
Pru Life UK receives four golden arrows for solid corporate governance
‘NCR Plus’ to be under MECQ starting April 12 until April 30 — Palace
Speed up your game with the new vivo Y20s [G]
MOST READ
Stop ‘creeping occupation’ of ‘militia’ boats in WPS, Pacquiao asks China
Bea Alonzo clarifies status of her relationship with Dominic Roque
Convicted former aide of Sen. Bong Revilla dies — BuCor
Locsin to China: ‘Then move out’
Don't miss out on the latest news and information.