DOH warns: Worst is yet to come 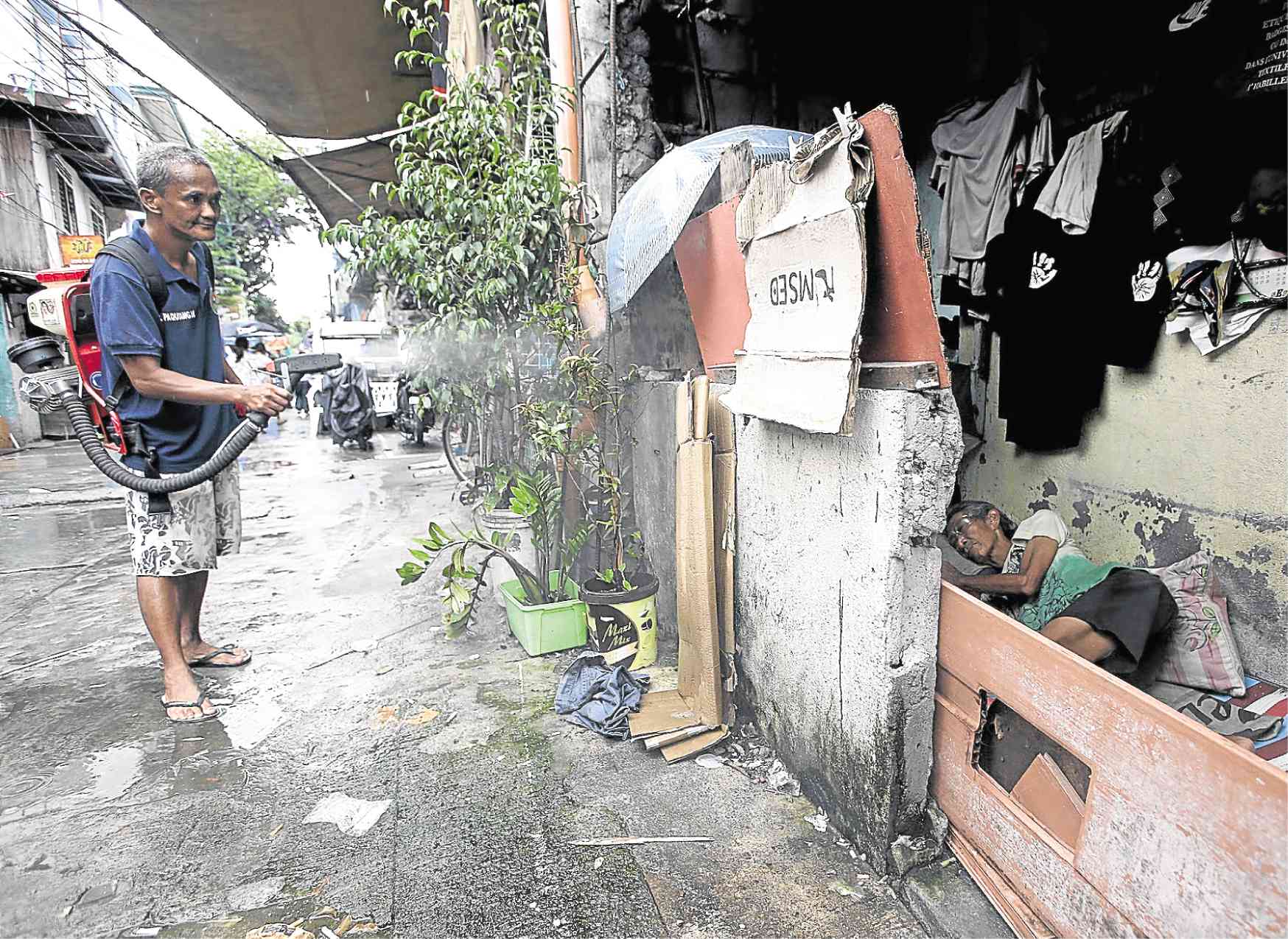 GETTING TO THE SOURCE A barangay worker sprays mist in Baclaran, Parañaque City, as part of measures to destroy possible breeding sites of mosquitoes carrying dengue virus. —RICHARD A. REYES

MANILA, Philippines — The worst is yet to come.

At least 40,000 people are in danger of being infected with dengue in October as the mosquito-borne viral disease is expected to peak in the next two months, an official of the Department of Health (DOH) said on Wednesday.

Dr. Ferchito Avelino, head of the DOH Epidemiology Bureau, said the 146,062 total number of cases the health department recorded from January to July 20 was just half the expected number of infections this year.

“By October, we are expecting a peak in dengue cases,” Evelino told reporters after attending a hearing called by the Senate health committee presided over by Sen. Bong Go.

“The hatching (of mosquitoes’ eggs) happened four times in a month and there were already thousands of eggs hatched,” he said.

Detained Sen. Leila de Lima said President Duterte, Public Attorney’s Office (PAO) chief Persida Acosta and her “cohorts” should be held liable for the disease outbreak, saying their efforts to vilify the previous Aquino administration by using the Dengvaxia controversy had led to a vaccine-scare.

Acosta led the filing of charges against former government officials who had a role in the purchase of Dengvaxia for P3.5 billion, which the PAO chief claimed caused the deaths of hundreds of schoolchildren inoculated with the dengue vaccine.

“Duterte wanted the (Aquino) administration pinned down, if not crushed, on the Dengvaxia issue. He even wanted the charges to be murder,” De Lima said, referring to Acosta’s admission that the President had suggested the filing of murder cases against former President Benigno Aquino III.

“Acosta obliges and causes the worst public health crisis in Philippine history by sensationalizing the issue and single-handedly creating a vaccine-scare. Now hundreds died and hundreds more are hospitalized for dengue,” De Lima said in a handwritten statement.

Senate President Pro Tempore Ralph Recto urged the public to support the initiatives of the DOH and other state agencies to contain the dengue epidemic.

“The fight against dengue is not for the DOH alone to wage, but for the whole country. One agency cannot win the war. It must be joined by the people,” Recto said.

In the Bicol region, a “4 o’clock habit” campaign is being adopted to combat dengue.

The synchronized “Sabayang 4 o’clock habit para Deng-Get Out” of the DOH involves searching and destroying mosquito breeding sites in homes, workplaces and schools.

The DOH regional epidemiology surveillance unit recorded 4,241 dengue cases between January and Aug. 3, with 40 deaths. The number of cases and fatalities were 157 percent and 122 percent higher, respectively, than what they were in the same period last year.

Dr. Ernie Vera, DOH regional director,  said the figures reported were only the “tip of the iceberg” as these were gathered from a trending formula used in collecting data from 11 hospital sentinels across Bicol.

The DOH adopted the trending formula in its report, while the complete data could be gathered from the provincial health offices, Vera said. The data, however, were still being confirmed further.

Duque announced the declaration of a national dengue epidemic in an effort to improve response to the outbreak by allowing local governments to draw on a special quick response fund.

According to the DOH, 146,062 cases of dengue were reported nationwide from January through July 20, or 98 percent more than in the same period in 2018. The outbreak claimed the lives of 622 people.

While there is no specific treatment for the illness, medical care to maintain patients’ fluid levels is seen as critical.

Other Southeast Asian countries have reported an upsurge in dengue cases this year, according to the World Health Organization.

In South Asia, Bangladesh has been facing its worst-ever dengue outbreak, putting a severe strain on the country’s already overwhelmed medical system.

Vera said the health department had tapped the services of the Department of the Interior and Local Government (DILG) in ensuring that the synchronized 4 o’clock habit would be carried out in the region.

“We enjoin all government agencies, [local government], schools, private offices and … Bicolanos to conduct their Sabayang 4 o’clock habit para Deng-Get Out,” he said.

The DILG has directed all local governments to conduct synchronized sanitation and cleanliness campaigns against dengue.

The EOCs are tasked with implementing the  cleanliness drive covering six provinces down to the 3,741 villages in Bicol.

“We will mobilize our field units to closely monitor preventive and control measures by local government[s],” said Nuyda in a phone interview on Wednesday.