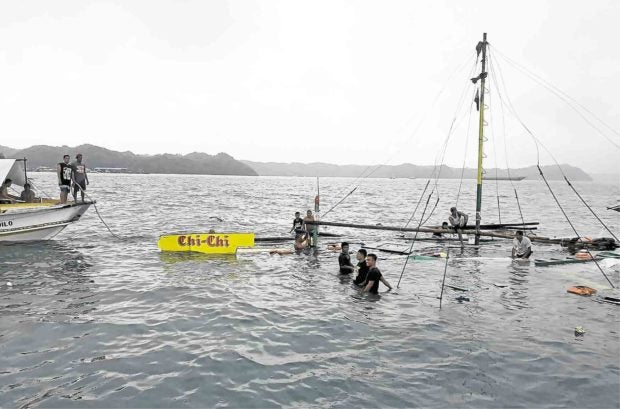 TRAGEDY AT SEA The motorboat Chi-Chi was carrying 43 passengers and four crew members when it encountered rough waters and sank in Iloilo Strait on Saturday. The Chi-Chi’s passengers were among the 30 fatalities of the Aug. 3 accidents involving three boats. —PHOTO COURTESY OF PHILIPPINE RED CROSS VIA AP

ILOILO CITY, Iloilo, Philippines — For the past three days, teacher Rexie Lorilla could barely close her eyes and sleep.

“Every time I close my eyes I imagine myself under the boat hearing prayers and shouts for help,” said Lorilla, a teacher at Lambunao National High School (LNHS) in Iloilo province who survived when the motorboat she and fellow teachers were riding sank in Iloilo Strait on Saturday.

Lorilla, 44, was grateful that she was reunited with her husband Gilbert. But she is grieving for fellow teachers Maria Emilie Legarda, Ivy Grace Labordo, Ma. Zeny Anilao and Lynlyn Janolino, who died when a squall overturned their boat while sailing from Buenavista town in Guimaras province to Iloilo City.

The group, all teaching Filipino subjects at LNHS, traveled to Guimaras on Saturday morning to submit requirements in preparation for their comprehensive examinations for their master’s course at Guimaras State College.

On Monday, teachers and students of LNHS lit candles and offered prayers for the teachers. The Philippine flag on campus was flown at half-staff.

The four teachers were among the 18 fatalities who were on board the Jenny Vince, one of three motorboats that sank amid rough waters in the Iloilo Strait.

As of Monday, 28 passengers of the Jenny Vince and the motorboat Chi-Chi died in the accidents. Two more bodies, believed to be among the six missing passengers, were recovered on Tuesday morning but they remained unidentified.

While she was struggling to save herself, Lorilla said she heard cries for help and prayers from fellow passengers trapped in the capsized Jenny Vince.

After nearly 30 minutes, rescuers arrived and bore a hole on the hull to pull the passengers out.

Lorilla had to stay for another 10 minutes sitting on the upturned boat to help other passengers, especially those unconscious who were immediately taken to shore.

One of the rescuers threw a life buoy to Lorilla before she was pulled toward a rescue boat and taken to a hospital in Iloilo City.

Around three hours before the Jenny Vince sank, the motorboats Chi-Chi and Keziah had already capsized while sailing to neighboring Jordan town in Guimaras from Iloilo City. At least 52 passengers, including Lorilla, survived the accidents.

“We were watching the rescue operations from the [Buenavista] port because the Coast Guard stopped our boat from leaving,” Lorilla said.

Lorilla had resolved to stay overnight in Guimaras and had withdrawn money from a bank ATM to pay for their hotel.

But her fellow teachers were able to convince her to proceed with the trip after the Coast Guard eventually allowed their boat to leave.

“The skies had cleared and the water was calm when we left the port,” Lorilla said.

Lorilla said she and her fellow teachers did not know how to swim. She said she repeatedly changed her life jacket so she could wear a newer set.

“I tied it tightly and we settled on the third row from the front of the boat,” she said.

But tragedy struck more than halfway of what was supposed to be an uneventful 15-minute trip.

“The sky suddenly darkened and I heard a howling sound of the wind. Our boat tilted to one side and then capsized,” Lorilla said.

While she was struggling in the water, she was calling out Labordo, whom she thought was still beside her.

Labordo, Anilao and Legarda were among the 11 fatalities whose bodies were recovered on Sunday in Dumangas town in Iloilo, about 28 kilometers from Iloilo City. Janolino died while being taken to St. Paul’s Hospital in Iloilo on Saturday.

Lorilla was thankful for having a “second life,” vowing to “change what I still can with my life.”

But the trauma brought about by the accident made her fearful of sea travel. “I will not ride a boat again,” Lorilla said.