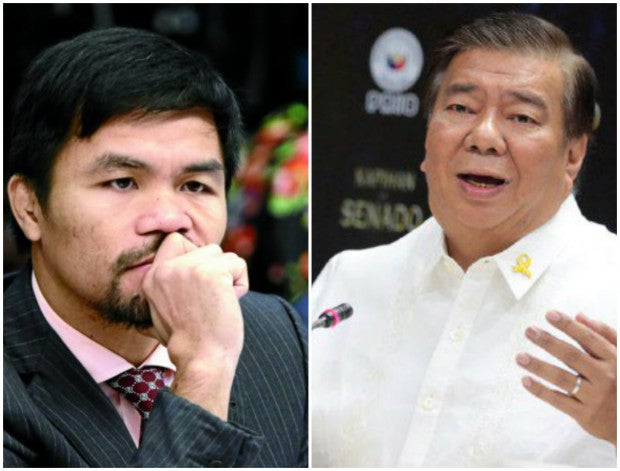 MANILA, Philippines — The issue on whether or not Jesus Christ was wrongfully executed emerged as Senator Manny Pacquiao opened discussions on the proposed reimposition of the death penalty on Wednesday.

It all started when Pacquiao, one of the proponents of the death penalty bill, delivered a privilege speech, urging the Senate committee on justice and human rights to prioritize the proposed measure.

If enacted into law, Drilon noted, the capital punishment would be imposed by judges and Supreme Court justices.

“These are men – although of great knowledge – as human beings, they can be fallible… can commit mistakes?” he asked.

Pacquiao agreed, adding that no one is perfect.

“The most important thing is we have to trust our authority, which is the government,” the boxing champ-turned-legislator said.

“But all of us are fallible, we can commit mistakes,” Drilon pressed. “In fact, in the history of man, only one can claim infallibility? Would the gentleman know that man?”

“Jesus Christ,” Drilon said, “And yet Jesus Christ was a victim of wrongful execution. Is that correct?”

But Pacquiao seemed to disagree, noting that Jesus Christ sacrificed himself to save the lives of people.

“Are you saying the execution of Jesus Christ was a correct execution?” Drilon then asked.

“Perhaps, what the gentleman means is that the redemption would not have been possible if Jesus did not die on the cross…” Sotto said.

Drilon went on, this time, he agreed with Pacquiao’s assertion that the imposition of the death penalty is not a question of constitutionality as it is provided for in the 1987 Constitution.

“And therefore the debate should be on a question of policy. Is that correct?” he asked again.

To his surprise, however, Pacquiao answered no.

“Why is it not correct on policy? We’re here in the halls of Congress precisely to debate on policy,” Drilon pointed out.

“So what will we debate on if not a policy?” he further asked.

Drilon noted that it was Pacquiao himself, who said that Congress, under the Constitution, may provide for a death penalty for heinous crimes. Pacquiao later conceded.

Other senators also stood up to interpellate Pacquiao while Drilon reserved to continue his questioning on Wednesday. /kga