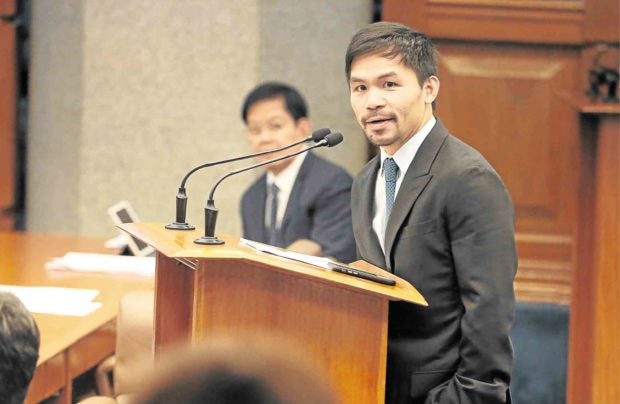 MANILA, Philippines — Senator Manny Pacquiao urged on Tuesday the Senate committee on justice and human rights to prioritize the hearings on bills seeking to reimpose death penalty in the country.

“I urge the committee on justice and human rights to prioritize the committee hearings on this matter [reimposition of death penalty],” Pacquiao said in his privilege speech.

“The focus on our debate on the reimposition of the death penalty should be on the basis of its constitutionality,” he said.

He noted that the current Constitution “reserve the imposition of the capital punishment so abhorrent to orderly society.”

Pacquiao is one of the four senators who filed bills seeking to reinstate capital punishment in the country.

His version proposed that the death penalty be imposed to illegal drug traffickers and illegal drug manufacturers.

During his speech, Pacquiao insisted that illegal drugs are “destroying the lives of the people” and “the organized international drug syndicates are more aggressive than ever.”

He pointed out that capital punishment in the country would serve as “self-defense” against international drug syndicates and traffickers that smuggle dangerous drugs in the Philippines.

“It is high time for the state to step up its game and put these criminals to death through judicial sanction,” the senator said.

“This death penalty is a self-defense of the state to protect its people from the destruction of lives and properties brought by drug-related crimes that undermine the Filipinos’ faith in the government’s ability to maitain peace and order in the country,” Pacquaio added. /jpv