ISULAN, Sultan Kudarat –– One of the suspects in the August 28, 2018 bombing in this capital town of Sultan Kudarat province fell into the hands of authorities over the weekend.

He was arrested Saturday, August 3, in a joint operation of police and military forces in his residence in Barangay Madia, Datu Saudi Ampatuan, Maguindanao. 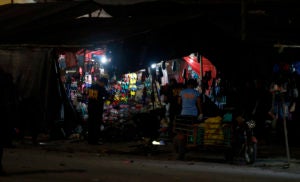 (FILE PHOTO) Military and police bomb experts look for fragments of a homemade bomb that ent office at street festival Tuesday night, August 28, 2018 in the southern town of Isulan in Mindanao. Suspected pro Islamic State militants detonated a homemade bomb, leaving one dead and 35 others wounded, nearly a month after they also set off a car bomb that left eleven people dead in the Island province of Basilan. Jeoffrey Maitem/Inquirer Mindanao

The suspect, according to Buenacosa, is believed to be a member of the Islamic State-linked Bangsamoro Islamic Freedom Fighters (BIFF).

Police said that based on witnesses’ accounts, Kuti was one of the two young men who left a back pack under a parked motorcycle in front of stalls selling imported used clothes.

Buenacosa added that Kuti was also linked to the March 2016 foiled roadside bombing during a town-wide civic-military parade.

Four days after the first bombing, a second bomb ripped through an internet café in Barangay Kalawag 2, Isulan that killed three persons and injured a dozen others on Sept 2, 2018.