San Juan to lose P2.5M monthly amid ban on pay parking on streets 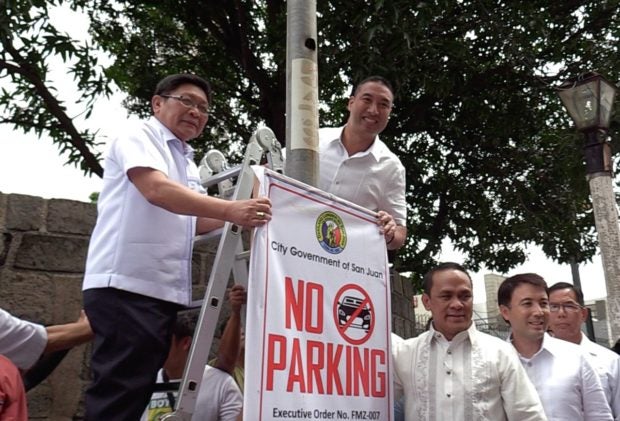 MMDA chair Gen. Danilo Lim and San Juan City Mayor Francis Zamora led the posting of “No Parking” sign as the city implemented the Executive Order No. FMZ-007, an order suspending pay parking in all the streets of the City of San Juan, starting on Monday, August 5, 2019. Noy Morcoso/INQUIRER.net

MANILA, Philippines — Roughly P2.5 million will be lost per month by the local government of San Juan after Mayor Francis Zamora formally implemented on Monday the ban on pay parking along the streets of the city.

Zamora said that around 300 parking slots around San Juan will be affected by Executive Order Number 07 that prohibits pay parking on all the city’s streets, including Mabuhay lanes.

“We’re only talking about a total of around 300 parking slots that will be removed, pero isipin niyo naman yung libo-libong motorista na napwe-perwisyo nitong 300 slots nito araw-araw,” he added.

Zamora also said that the public has other options in parking space. He noted that there were some parking buildings in San Juan that are open for 24 hours while some are open as early as 5 a.m.

Zamora further stressed that the Greenhills Shopping Center also offers around 4,000 parking slots for motorists to use.

Zamora said that this move of the local government of San Juan is in line with the directive of President Rodrigo Duterte to “reclaim” the public roads in Metro Manila.

This is also in compliance to the order of the Department of Interior and Local Government to clean up the streets in just a span of 60 days.