MANILA, Philippines — An old woman was killed while a tricycle driver was injured when a Philippine Army truck reportedly went wayward before hitting a tricycle and eventually crashing into a house in Tanza, Cavite.

According to a report from the Cavite police on Tuesday, the five-ton Army truck was traveling along Tanza-Trece road going to the Tanza town proper at around 10:30 p.m. Monday when, due to heavy rains, the driver lost control of the wheel. 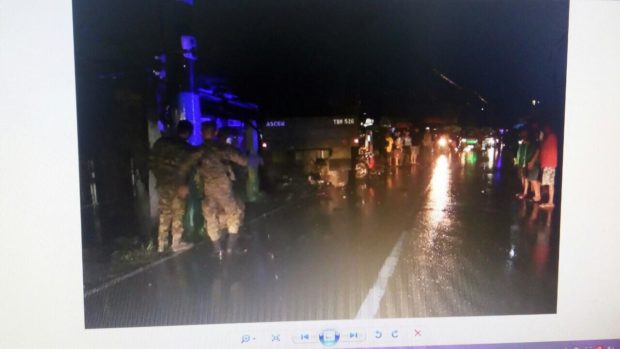 A screengrab of the highway where an Army truck smashed into a house in Cavite. Photo from the PNP

The truck went wayward into the opposite lane before accidentally hitting a passing tricycle and later smashing into a house.

Police said the passenger of the tricycle identified as 72-year-old Antera Noriel died on the spot while the tricycle driver Edgar Pacinos sustained injuries.

The driver of the truck was identified as Private First Class Christian Dave Aseñas, a 22-year-old member of the Philippine Army.

Lt. Col. Freddie Parungao Dantes, chief of the Tanza Municipal Police, said the families of the victims agreed to have an amicable settlement with Aseñas. /jpv