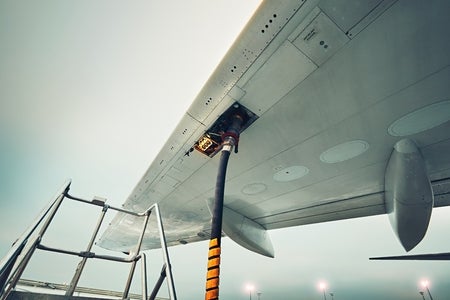 A woman narrowly missed getting hit by an aircraft fuel cap that fell from the sky and crashed into her backyard swimming pool.

Dara Hackett and her friend were sitting on her patio in Florida, United States when they heard a loud noise, CBS-affiliate WKMG-TV reported on Thursday, Aug. 1. It turned out to have been caused by a disc-shaped aircraft fuel cap, about 8 inches in width and smelling like gas.

“Worse than a gunshot. Like a very, very, very loud bang, a ting noise,” Hackett was quoted as saying. “Then, you heard it hit the pool and splash.”

A label on the aircraft fuel cap said “fuel servicing” and codes showed that it was a “commercial aircraft grade fuel cap,” as per report.

Hackett did not know from which aircraft the cap came from, but stressed how she was frightened by it.

Representatives from the Federal Aviation Administration said there were no reported emergency landings at Orlando International Airport and Tampa International Airport on the day of the incident. They added that they are investigating to determine where the fuel cap exactly came from. Hannah Mallorca/JB

Air travel was chosen by 4.4 billion travelers in 2018

ADVERTISEMENT
Read Next
Albayalde: So far there’s no sign to call for martial law in Negros Oriental
EDITORS' PICK
PH preps for China virus: Question of when, not if
Beyond water service: Maynilad builds massive infrastructure projects to clean up Metro Manila waterways
Museums ‘put to sleep,’ churches closed amid volcano’s unrest
Seventh judge assigned to handle De Lima case
SM continues to send relief assistance to remote towns in Batangas
Get exciting deals and discounts when you download the new McDonald’s App
MOST READ
Taal Volcano flexes signs of restiveness anew
Passengers from Wuhan, China to be flown out of Kalibo, Aklan – CAAP
Lacson on Duterte’s threat to end VFA over Bato’s canceled visa: Where is the connection?
Part of Aurora Boulevard in Cubao closed from Jan. 25 – Feb. 1
Don't miss out on the latest news and information.