MANILA, Philippines – Philippine National Police (PNP) chief Gen. Oscar Albayalde awarded on Monday the Commendation Medal (Medalya ng Papuri) to a police officer caught on camera bravely chasing after a suspected snatcher in Ermita, Manila and to his team leader who helped in the arrest.

During the flag-raising ceremony at Camp Crame in Quezon City, Albayalde awarded the medal to Patrolman Jonathan Stanley Dionisio and Cpl. Timothy John Cruz, the former’s team leader who helped in the operation but was not seen in the video uploaded on social media.

Dionisio and Cruz, members of the Special Mayor’s Reaction Team of the Manila Police District, responded to a robbery incident at Lagusnilad Underpass on August 2 and spotted the suspect, identified as Angelo Gallardo. 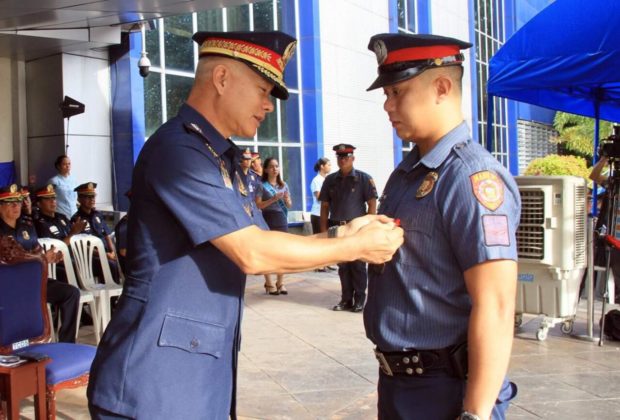 Pat. Jonathan Stanley Dionisio receives the Medalya ng Papuri from Philippine National Police chief Gen. Oscar Albayalde at Camp Crame in Quezon City on Monday. Dionisio and his team leader, Cpl. Timothy John Cruz were commended for pursuing and arresting a robbery suspect at the Lagusnilad underpass in Manila over the weekend. (Photo courtesy of PNP)

In the video, Dionisio was seen chasing Gallardo who allegedly stole a gold bracelet from a jeepney passenger.

Gallardo boarded another jeepney in a bid to escape but alighted and tried to flee anew when Dionisio approached.

Dionisio eventually subdued and arrested him.

Gallardo was later brought to the Special Mayor’s Reaction team office but was released after the victim failed to identify the person who stole her bracelet.

While the person of interest has been released, the PNP said in a statement that it awarded the medals to the two policemen for “displaying efficiency and devotion to duty” during the operation. /gsg