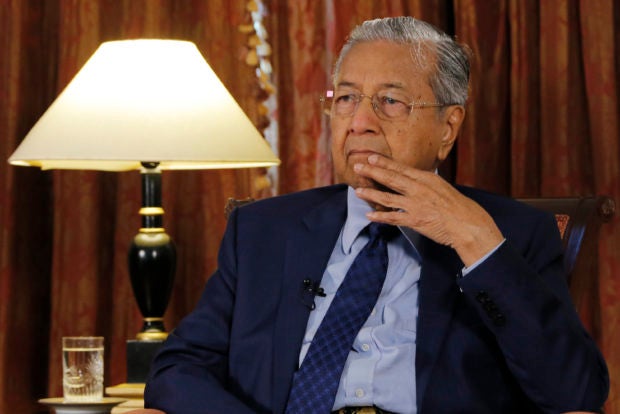 In an exclusive interview with the Anadolu Agency last week, Mahathir said the Rohingyas “should either be treated as nationals, or they should be given their territory to form their own state.”

Myanmar’s Permanent Secretary to the Ministry of Foreign Affairs Myint Thu said such allegations would not help the efforts of Myanmar government and Asean in finding a sustainable solution for peace, development and social harmony in Rakhine State.

Thu, who met Malaysian Ambassador to Myanmar Zahairi Baharim on Wednesday at Myanmar’s foreign ministry headquarters in Naypyitaw, also said the Malaysian leader’s statement was not constructive and described it as a breach of principles enshrined in the Asean Charter.

“It was also against the Asean’s cardinal principles of non-interference in the internal affairs and respect for the sovereignty and territorial integrity of Asean member states,” said the ministry in a statement.

Many commentators, however, blamed Myanmar for “buying time” and diverting the international community’s focus, by repeatedly denying crimes it has committed against the Rohingya community in the Rakhine state.

Some 750,000 Rohingyas fled state persecution since August 2017 and took shelter in Bangladesh as thousands were killed, raped and hundreds of Rohingya villages were completely burnt.

Meanwhile, nearly two years after the mass influx of Rohingyas into Bangladesh, the repatriation could not begin as the refugees say the situation in Rakhine is not conducive for return, while there is no guarantee of citizenship, which they have been denied since 1982.

The situation in Rakhine has deteriorated as violence in Rakhine escalated since early this year.

Maung Zarni, a coordinator of the Free Rohingya Coalition, meanwhile, said the Mahathir Mohamad was “discharging his obligations as a head of state, to call for ending the ongoing genocide, restoring Rohingya full and equal citizenship, or simply intervening to return Rohingya their stolen ancestral land by Myanmar.

“Mahathir is absolutely factual when he said Myanmar is committing a genocide.”

Zarni, who is also a fellow at the Genocide Documentation Center of Cambodia, told Turkey’s Anadolu Agency that there was an “overwhelming evidence that has been amassed by the UN Fact-Finding Mission, as well as my own research and that of world renowned research institutions such as Yale Law School Human Rights Clinic or US Holocaust Memorial Museum, to unequivocally support Mahathir’s statement about Myanmar commissioning a genocide.”

He also stated that all member states of the UN “are obligated to intervene orally, diplomatically or even militarily to prevent, end or punish a state that violates the Genocide Convention.”

Zarni criticized Asean for its policy to remain silent, about ongoing genocide against Rohingya.

Kyaw Win, head of a UK-based rights group, stated that Myanmar has a “well-planned strategy to eliminate the Rohingya population from the country” and it “knows how to buy time”

Win, who is also executive director of the Burma Human Rights Network, said it was a moral duty of every human being to raise voice against a country engaged in committing mass atrocities, such as genocide or crimes against humanity.

The rights activist called for a pragmatic approach that can achieve the return of the Rohingyas to their home with dignity and rights. /jpv