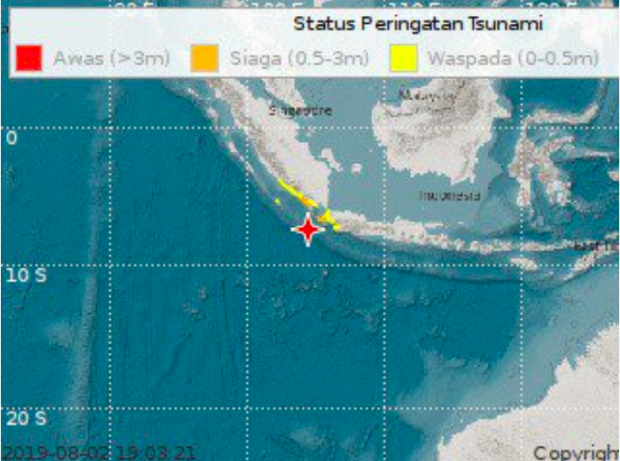 The official Twitter account of the Meteorology, Climatology and Geophysics Agency (BMKG) has confirmed in a tweet that there was a 7.4-magnitude earthquake. The epicenter was 147 km southwest of Sumur, Banten, with a depth of 10 km. The BMKG has issued a tsunami warning. Image from BMKG/ANN

JAKARTA–A 7.4-magnitude earthquake jolted the southern coast of Banten on Friday evening, with shocks felt in Jakarta and Bandung, West Java.
According to the Meteorology, Climatology and Geophysics Agency (BMKG), the earthquake was recorded 147 kilometers southwest of Sumur, Banten, at a depth of 10 km.
The agency issued a tsunami alert minutes after the earthquake.
A Twitter user with the handle @bapakcahill shared a video showing the situation on a road in Sumur, Banten, near the epicenter of the quake. People are seen rushing along the road.

According to a report from the National Disaster Mitigation Agency (BNPB), the quake was felt for five to 10 seconds in Pandeglang, Banten—located roughly 85 km from the earthquake’s center. Residents exited the buildings during the earthquake.
The earthquake was as strong as the one that devastated Palu, Central Sulawesi, last year, in which 2,000 people were killed after a tsunami. People in Jakarta and Bandung also said they felt the earthquake.
The United States Geological Survey (USGS) in its announcement mentioned that the quake was of 6.8-magnitude.
In another Twitter post, a user shared a video showing people panicking inside a mall in Jakarta.
The BMKG has alerted residents in Pandeglang in Banten and West Lampung, Lampung, to brace for rising sea waters of up to 3 meters in height.  /jpv