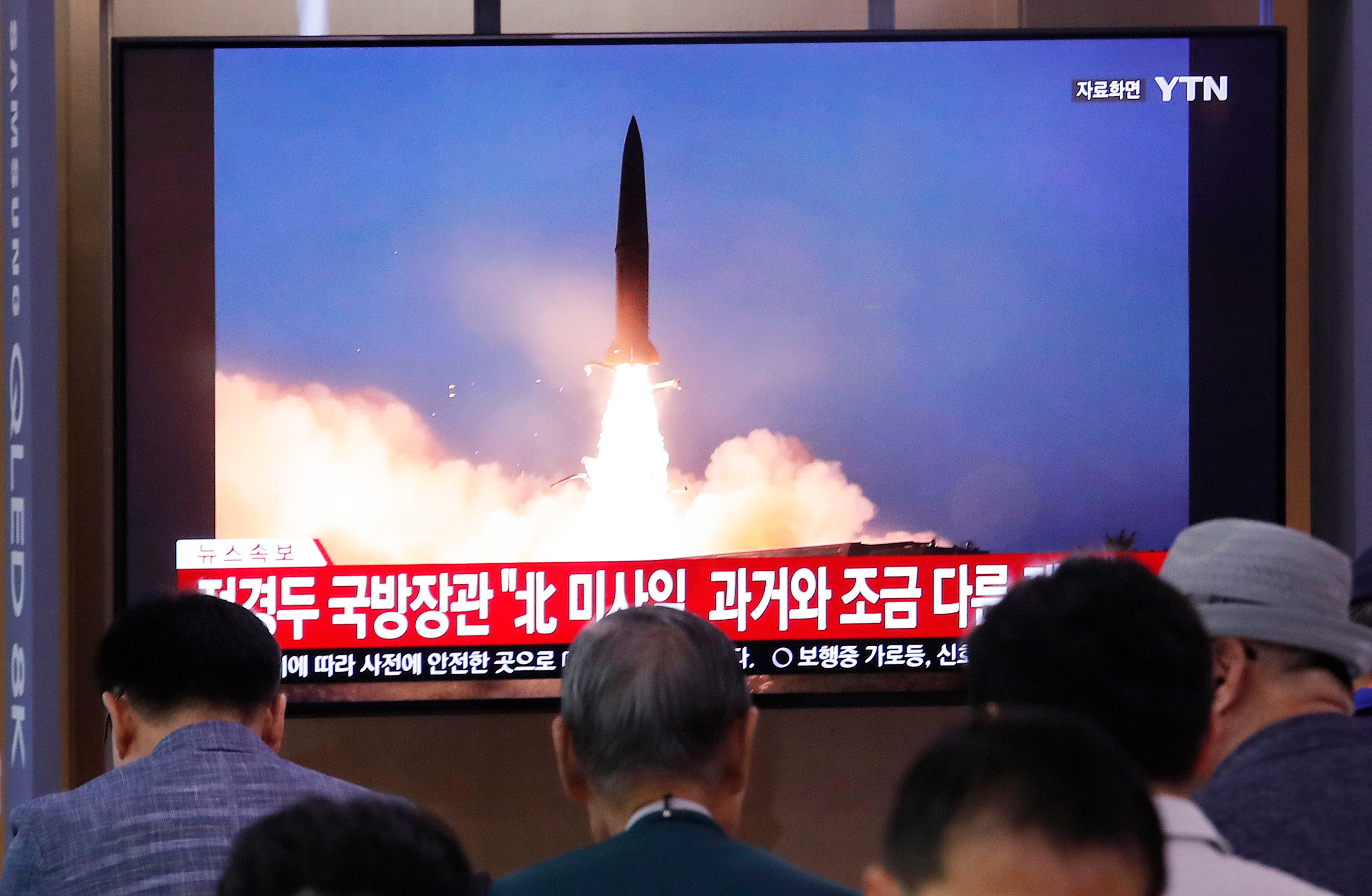 People watch a TV showing a file image of North Korea’s missile launch during a news program at the Seoul Railway Station in Seoul, South Korea, Wednesday, July 31, 2019. North Korea on Wednesday fired several unidentified projectiles off its east coast, South Korea’s military said, less than a week after the North launched two short-range ballistic missiles into the sea in a defiance of U.N. resolutions. The signs read: “North Korea’s missile is a bit different from the past.” (AP Photo/Ahn Young-joon)

The report by Pyongyang’s official Korean Central News Agency came a day after South Korea’s military said it detected North Korea firing projectiles twice into sea off its eastern coast in its third round of weapons tests in just over a week.

Experts say the North’s increased testing activity is aimed at ramping up pressure on Washington and Seoul over the stalled nuclear negotiations with the United States and planned U.S.-South Korea military exercises, and that its weapons displays could intensify in the coming months if progress on talks isn’t made.

The report didn’t include any direction mention of the United States or South Korea.

South Korea’s Joint Chiefs of Staff said the launches were conducted at 2:59 a.m. and 3:23 a.m. from an eastern coastal area and said the projectiles flew 220 kilometers (137 miles) on an apogee of 25 kilometers (15 miles) and at a max speed of Mach 6.9. The range would be enough to cover the metropolitan area surrounding Seoul, where about half of South Koreans live, and a major U.S. military base just outside the city.

North Korea said those tests were designed to deliver a “solemn warning” to South Korea over its purchase of high-tech, U.S.-made fighter jets and the planned military drills, which Pyongyang calls an invasion rehearsal. The North also tested short-range missiles on May 4 and 9.

The North’s new launches came as the United Kingdom, France and Germany — following a closed U.N. Security Council briefing — condemned the North’s recent ballistic activity as violations of U.N. sanctions and urged Pyongyang to engage in “meaningful negotiations” with the United States on eliminating its nuclear weapons.

The three countries also urged North Korea “to take concrete steps toward its complete, verifiable and irreversible denuclearization” and said international sanctions should remain in place until its nuclear and ballistic missile programs are dismantled.

In a separate report carried through KCNA on Saturday, an unidentified spokesman of North Korea’s Foreign Ministry criticized the statement released by the three countries, saying that the North never has and never will recognize the U.N. resolutions it sees as an “insult, disregard, and grave provocation” against its government.

U.S. officials have downplayed the threat of the launches to the United States and its allies.

However, the North’s recent weapons demonstrations have dampened the optimism that followed President Donald Trump’s impromptu summit with Kim on June 30 at the inter-Korean border. The leaders agreed to resume working-level nuclear talks that stalled since February, but there have been no known meetings between the two sides since then.

The North has claimed the United States would violate an agreement between the leaders if it moves on with its planned military exercises with South Korea and said it will wait to see if the August exercises actually take place to decide on the fate of its diplomacy with Washington.

Trump said on Thursday he wasn’t worried about the weapons recently tested by North Korea, calling them “short-range missiles” that were “very standard.”  /muf