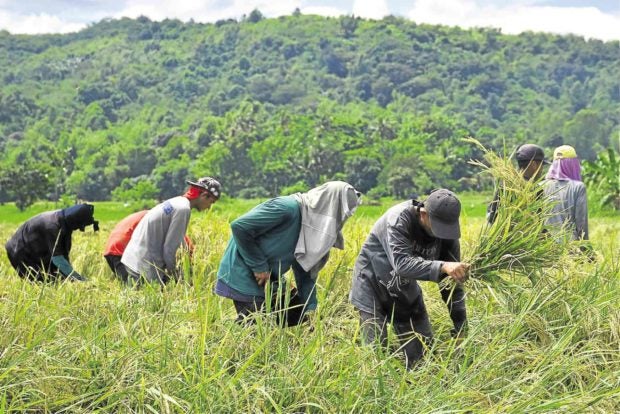 IT’S NEVER FUN  It would seem that planting rice would never be fun, especially for hundreds of thousands of farmers who had stopped the backbreaking work in the field because of falling prices of the staple resulting from import liberalization. —WILLIE LOMIBAO

Opposition Sen. Francis Pangilinan on Friday sought an inquiry into the reported adverse effects of the rice tariffication law, which allegedly led to the shutdown of 4,000 rice mills around the country and prompted 200,000 farmers to abandon their farms just five months after the measure was passed.

“The impact of the [new] law on our farmers is swift and brutal, but the implementation of the provisions aimed at easing this severe effect is slow [or] nonexistent,” Pangilinan said in filing Senate Resolution No. 36.

“We should act fast or we might wake up one day without farmers [tilling] our lands,” he warned.

It was unclear, however, whether this could be done under Republic Act No. 11203, which the President signed in February to impose tariffs on imported rice in lieu of volume restrictions.

Pangilinan said he wanted to know what happened to the P10-billion Rice Competitiveness Enhancement Fund (RCEF), which the law mandated supposedly to soften the impact of the imported staple on rice farmers by providing financial aid to them and financing the government’s farm modernization programs.

“Even consumers did not seem to benefit from this law because now we don’t have NFA rice, which then cost only P27 to P30 per kilo in NFA outlets,” he said, referring to the National Food Authority, the state agency tasked to regulate rice trading.

Sen. Cynthia Villar earlier this week also sought an inquiry into the RCEF.

Villar noted that the Department of Budget and Management (DBM) had released P5 billion for the farmers ahead of Mr. Duterte’s signing of the measure .

The use of the remaining P4 billion was still being threshed out by the National Economic and Development Authority and the Department of Agriculture (DA), she said.

According to Villar, the DBM said the P5 billion was for the RCEF, but according to the DA it was for other purposes.

Pangilinan noted that the RCEF was supposed to help the local rice industry become more competitive and counter the negative impact of the law which further liberalized the country’s rice market.

The Philippine Confederation of Grains Association (Philcongrains) earlier this week reported that the new law drove the owners of around 4,000 rice mills to cease operations after the buying price for palay, or unmilled rice, nosedived.

“Farmers tell us that their earnings dropped further with the implementation of the law. ‘Rice tariffication is killing us,’ said one farmer from Nueva Ecija who approached us,” Pangilinan said.

Philcongrains president Joji Co told the Inquirer many rice mills were having a hard time coping with the open market and decided to halt operations to avoid further losses.

With the abundant supply of imported rice, prices of both palay and rice have been going down at levels that were hurting both farmers and millers.

“They were forced to close down during the last harvest because they bought palay at relatively high prices back then and now prices have plummeted. So who else will buy from them?” Co said.

As of the second week of July, the average retail price for regular milled rice was P38.40 per kilo and P42.88 for well-milled. While still higher than last year, the downward trend has not been reversed since January.

Co added that the decline in rice prices was not only affecting small- and medium-scale operators but even large mills that, ideally, could absorb price fluctuations better.

In Isabela alone, Co said, six large-scale rice mills that could be worth as much as P100 million each have already closed down.

In Bocaue, Bulacan, about 80 to 90 percent of the rice mills have stopped operating. The establishments’ rice reserves, Co added, were all imported rice.

According to Pangilinan, Agriculture Secretary Manny Piñol admitted that local rice farmers would suffer P114 billion in losses this year due to the steady decline in the farmgate price of palay, which already dropped by 16.4 percent midyear from the same period last year.

In some areas, he said, farmers reported that palay was selling at only P12 per kilo.

“Aside from the mentioned data, we hope concerned government officials will listen to the farmers so that they understand the dire straits farmers face,” Pangilinan said.