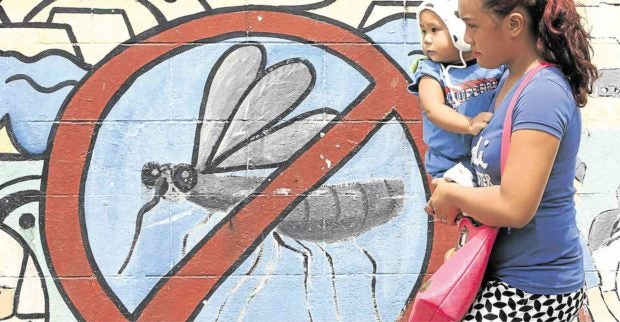 PESKY, DEADLY INSECT An anti-dengue mural at San Lazaro Hospital in Manila reminds people about the government’s fight against disease-carrying mosquitoes. Recently, the Department of Health declared a national alert due to the increasing cases of dengue. —MARIANNE BERMUDEZ

MANILA, Philippines — While there is nothing final yet regarding the possible reuse of dengue vaccine Dengvaxia, Malacañang on Friday vowed not to repeat the “mistakes of the past” should the government make the controversial vaccine available again.

“Nothing is final yet but we vow that we will not repeat the mistakes of the past, where Dengvaxia was allegedly misused and mishandled in aid of political election with haste,” presidential spokesman Salvador Panelo said in a statement.

He was referring to the controversy that arose in November 2017 after French pharmaceutical company Sanofi Pasteur, the vaccine’s manufacturer, issued a belated advisory that Dengvaxia may lead to more severe symptoms of dengue for patients who have never been infected by the virus prior to vaccination.

This prompted the Department of Health (DOH) to stop the school-based dengue immunization program that was enforced under the previous administration. Several criminal complaints in connection with deaths supposedly linked to Dengvaxia have been filed by the Public Attorney’s Office.

But in January 2019, DOH said no death had been confirmed to have been directly caused by Dengvaxia. A month later, however, the Food and Drug Administration (FDA) permanently revoked the certificate of product registration of Dengvaxia.

While the government remains open to the reuse of Dengvaxia, Panelo said the revival of its use must be done with “utmost caution” by considering the opinion of the World Health Organization (WHO) and other medical experts.

“If Dengvaxia is proven effective to those who already had dengue in the past, then its application to these individuals will surely cause the decline of the overall number of cases of dengue which plague the residents of this country,” Panelo noted.

DOH declared a national alert on July 15 due to the alarming rise in dengue cases.

Panelo, who is also President Rodrigo Duterte’s chief legal counsel, added that the possible reuse of the vaccine will not affect the pending cases against former and current government officials involved in the Dengvaxia controversy.

“We will continue to leave this matter to courts of law as they decide the merits of the case,” Panelo said.

“Politics must be set aside when the health of the citizenry is in peril. This Administration will not sit idly and expect that a health concern will be resolved without any action on its part,” the Palace official added. /kga