Cory must be ‘grieving for us, what we have become’ | Inquirer News
Close
menu
search

Cory must be ‘grieving for us, what we have become’ 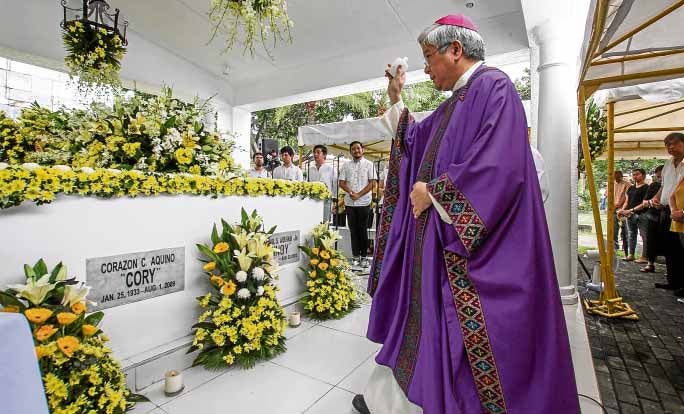 Ten years since she died, democracy icon Corazon Aquino must be “grieving for us”

This was the message in the  homily of Pangasinan Archbishop Soc Villegas in Thursday’s Mass attended by some 100 people, mostly family members, close friends and allies of the late President at Manila Memorial Park in Parañaque City.

As in past commemorations of the birth and death  of Cory and her husband, former Sen. Benigno “Ninoy” Aquino Jr., the country’s modern heroes who fought a dictatorship, their tombs were adorned with yellow flowers, as the color is associated with the victorious struggle against the Marcos dictatorship to win back the Filipinos’ freedoms.

These days, yellow is being disparaged by supporters of the Duterte administration and critics of the Aquino family.

“We can wipe away the tears of grief because I think it is the other way around: It is President Cory grieving for us at where we have gone, what we have become, who we are right now 10 years after she had passed on,” Villegas said.

It was a poignant reflection led by the archbishop before a crowd aligned with the democratic and liberal policies, and beliefs of the Aquino couple, as well as those of their only son, former President Benigno “Noynoy” Aquino III.

President Duterte has adopted more draconian policies, such as the bloody war on illegal drugs. He also has, time and again, threatened to impose martial law throughout the country, supposedly in the name of peace, order and national development.

Villegas is one of the Catholic clergy members facing sedition charges, along with Vice President Leni Robredo and other opposition stalwarts, for allegedly plotting the ouster of Mr. Duterte. All of those charged have denied the allegation.

Former President Noynoy Aquino remembered his mother as someone who “represented not just an ideal but actually somebody who lived the life of being the servant of the people in its totality whether officially in a public capacity or in a private capacity.”

Villegas emphasized in his homily how the late President’s deep faith and strong relationship with God had guided her leadership.

Villegas remained hopeful that “this episode in our history will come to an end and we will see a new light … we will not be left in darkness because a new dawn, a new day has come upon us.”

Other Cory supporters commemorated her 10th death anniversary and sought to protect her legacy as an icon of democracy.

For Sen. Francis Pangilinan, honoring the memory of the late President meant fighting efforts to revise the meaning of what she did.

Cory was installed as Philippine leader in February 1986 following a bloodless mass uprising on Edsa that unseated dictator Ferdinand Marcos.

She became a central figure of the opposition against Marcos after the assassination of her husband Ninoy in 1983.

Pangilinan pointed out inaccurate stories being spread about Cory online.

“The enemies of freedom have weaponized digital media to spread the propaganda erasing this triumph of democracy. We won our freedom in Edsa. We must protect our freedom and our history against revisionism,” he said in a statement.

Cory, he said, was “the shining icon of democracy.”

“She has inspired not only Filipinos. The Philippines started the trend of peaceful people power for the whole world,” he said.

The lessons from her struggle must not be forgotten, the senator said. “She symbolizes the people’s triumph in the hard-fought struggle against the dictatorship. It’s a lesson that should never be forgotten, especially now.”

Sen. Leila de Lima said Cory’s legacy still lived on in the hearts of millions who were touched by her fortitude, humility, dignity and heroism.

De Lima, a vocal critic of Mr. Duterte and who is detained on what she called fabricated drug charges, said Filipinos should be inspired by Cory’s courage in the face of overwhelming odds and injustice, violence and impunity during the Marcos era.

She taught people “to overcome their fear, to fight tyranny and restore our democracy,” De Lima said. “Despite the threats and harassment from the abusive regime, she accepted the challenge to lead the country so that it could rise from the dictatorship.”

Like Aquino, Filipinos should do their part to improve the situation of the country so that the lives, the dignity and the rights of people will be respected, she added. —WITH A REPORT FROM LEILA B. SALAVERRIA

Read Next
Lacson links ex-generals to STL corruption
EDITORS' PICK
Nestlé Philippines’ ‘NESCAFÉ Plan’ bags Grand Anvil at PRSP 56th Anvil Awards
Pope Francis to meet top cleric Sistani on second day in Iraq
Smart reinforces superiority with best speed and mobile video experience in PH
Don’t waste the hope of vaccines, warns WHO
Every Filipino home can now be a smart home with realme TechLife
822 NPA-free barangays set to get P20-M gov’t aid — Esperon
MOST READ
So: I lacked connections to succeed in PH ‘culture’
Gerald admits being with Julia, reveals breakup with Bea through ‘too many conversations’
Robredo on Sara Duterte leading poll surveys: Why are Filipinos drawn to leadership of this kind?
Giant clams worth P160M seized in Palawan raid
Don't miss out on the latest news and information.