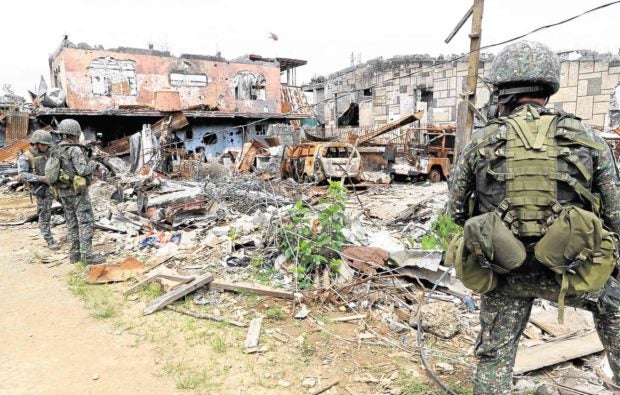 MARAWI OPS  A team of soldiers from the Philippine Marines makes sure that a section of the city center of Marawi has been cleared of gunmen in this photo taken in September 2017. —JEOFFREY MAITEM

ILIGAN CITY—The military on Saturday will detonate unexploded bombs recovered through the ongoing clearing of debris in war-torn Marawi City as the government prepares for the rehabilitation and reconstruction of the Lanao del Sur capital.

Assistant Secretary Felix Castro of Task Force Bangon Marawi (TFBM) said the government team set the blasting for Saturday to avoid disrupting classes. Many offices and establishments are also closed during that day.

These were retrieved from different areas in the city center and were remnants of the government’s five-month battle against Islamic State-linked militants who laid siege to the city on May 23, 2017. The fighting ended in October that year, with the deaths of leaders of the Maute and Abu Sayyaf groups who attacked the city.

Authorities estimated that 30 more bombs were needed to be recovered to ensure the safety of teams conducting clearing operations and to avoid problems in rebuilding work.

On July 23, soldiers found a 260-pound bomb in Barangay Moncado Colony. This bomb, the fifth recovered in the city since March, was buried some 9 meters deep.

Lt. Col. Elmer Oamil, commander of the Army’s 553rd Engineering Battalion and deputy commander of TFBM’s Joint Task Group Builder, said soldiers had to dig for several days in order to expose some portions of the bomb where detonating chords would be attached.

Other bombs recovered by soldiers would be placed inside a pit containing the 260-pound bomb in Moncado Colony and detonated, he said.

Castro is confident the combined blast will have minimal impact on its surroundings because the pit is walled-in by the ground.

Oamil said the blasting would be carried out between 10 a.m. and noon, and would require the closure of roads in the village of Papandayan to the “most affected area” in the city center, including Mapandi Bridge. —DIVINA M. SUSON