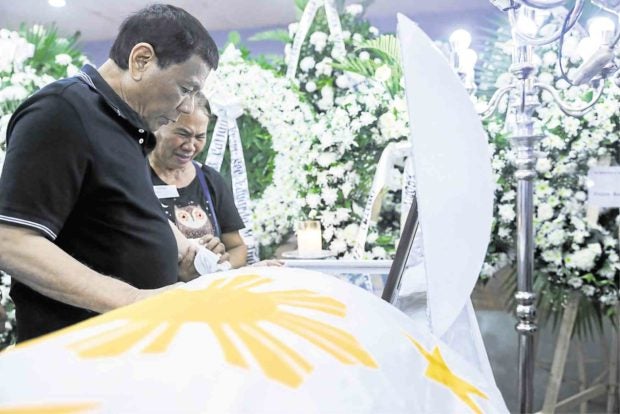 MOURNING President Duterte extends his sympathies to a relative of one of four policemen slain in a July 18 ambush by communist rebels in Negros Oriental province. The President visited the lawmen’s wake at Camp. Lt. Col. Francisco C. Fernandez Jr. in Sibulan town on Saturday. —MALACAÑANG PHOTO

MANILA, Philippines — President Rodrigo Duterte may declare martial law in Negros Oriental over the spate of killings in the province.

“Grabe na ‘yung patayan doon. We have a village, or a barangay captain, a municipal mayor, four policemen, and a lawyer. The President doesn’t want this to happen. He wants it stopped and the only way to do that is to use his emergency powers,” Presidential spokesperson Salvador Panelo said in a Palace briefing on Thursday.

Asked if which emergency power the President would invoke, he said, “He has many options under the Constitution. He can call the Armed Forces to quell lawless violence, he can declare martial law.”

He said the President would “certainly” follow the security officials if it would recommend martial law in Negros Oriental.

“Certainly. He always follows the advice of those people in the know,” he said. /kga