But even Tolentino’s opening statement did not sit well with Drilon.

“I continue to immerse myself with the sapient and judicious questions coming from the legal luminary, the Minority Floor Leader,” the neophyte senator said.

“I don’t pretend to be a legal luminary, Mr. President. I am an ordinary citizen,” Drilon answered.

The Minority Leader proceeded anyway, thanking Tolentino for bringing on the floor “a number of novel legal theories.”

“Many of these I have heard for the first time. These theories, however, in our view, are not settled,” Drilon said. “I am prepared to debate on the propositions here and now, but we do not claim to have a monopoly of legal knowledge. That’s why we qualify and deny the attribution that we are a legal luminary.”

Drilon believes, however, that the best avenue to test the validity of such “novel theories” is through a committee hearing — and not on the floor.

One of these novel legal theories, as Drilon pointed out, was this statement by Tolentino: “There is no restriction on either the form or substance of international agreements.”

“Following this proposition, can the President of the Republic enter into an oral or even a written agreement ceding the island of Panay, even if it is contrary to Article I of our Constitution on national territory?” Drilon asked.

Drilon also cited Tolentino’s “forceful assertion that matters of foreign policy are within the exclusive and absolute power of the President.”

The Minority Leader, nevertheless, congratulated Tolentino not only for “putting forward these novel theories” but also for “single-handedly opening up the discussion of complicated issues surrounding the West Philippine Sea.”

“The inquiry which will be conducted by the Committee on Foreign Relations was made possible by the early and timely manifestation of the gentleman,” Drilon said.

But Tolentino, who brought up the issue in his first privilege speech last Monday, would not just let the discussion end without defending his propositions. 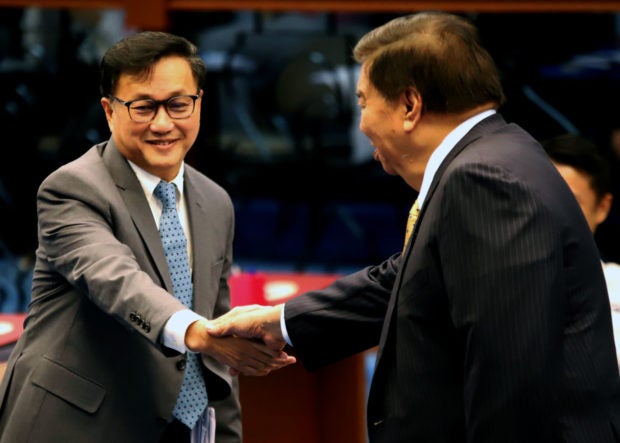 READ: Baptism of fire: Tolentino defends Duterte-Xi verbal fishing deal, but admits he got no details

He insisted that all his arguments were based on the President, whom he described as the chief architect of foreign policy.

This prompted Drilon to stand up again on the floor to remind about his earlier manifestation that the matter should be best discussed in a committee hearing.

“But if the gentleman wants to debate on the floor, we are ready, Mr. President,” Drilon said.

At this point, Tolentino conceded that it should be discussed in the appropriate committees.