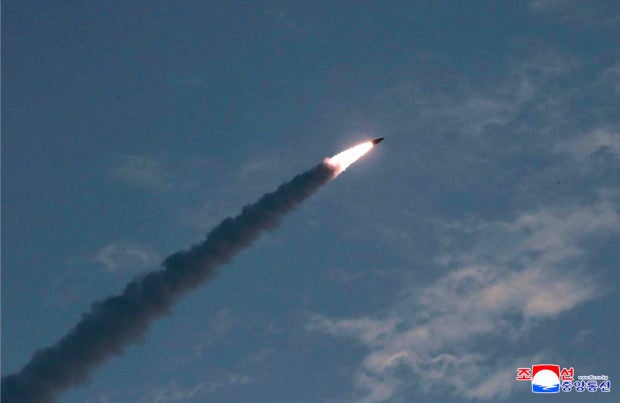 This Thursday, July 25, 2019, photo provided on Friday, July 26, 2019, by the North Korean government shows a test of a missile launch in North Korea. A day after two North Korean missile launches rattled Asia, the nation announced Friday that its leader Kim Jong Un supervised a test of a new-type tactical guided weapon that was meant to be a “solemn warning” about South Korean weapons introduction and its rival’s plans to hold military exercises with the United States. Independent journalists were not given access to cover the event depicted in this image distributed by the North Korean government. The content of this image is as provided and cannot be independently verified. Korean language watermark on image as provided by source reads: “KCNA” which is the abbreviation for Korean Central News Agency. (Korean Central News Agency/Korea News Service via AP)

Observers say the launches were aimed at ramping up pressure on the United States to make concessions as the two countries are struggling to resume diplomacy on the North’s nuclear weapons program.

South Korea’s Joint Chiefs of Staff said in a statement the latest launches were done from the North’s northeastern area. It said South Korea’s military is monitoring for possible additional launches by North Korea.

It wasn’t immediately known exactly what North Korea fired or how far the projectiles flew.

The official said a top staffer from the National Security Council hand-delivered photographs from the June Trump-Kim meeting at the demilitarized zone to a North Korean official last week. The Trump administration official spoke on the condition of anonymity because the official wasn’t authorized to speak publicly.

Diplomacy between North Korea and the United States remained deadlocked since the second Trump-Kim summit in Vietnam in February ended without any agreement. The summit fell apart after Trump rejected Kim’s demand for widespread sanctions relief in return for dismantling his main nuclear complex, a partial disarmament step.

South Korea’s military said the flight data of the weapon launched Thursday showed similarities to the Russian-made Iskander, a short-range, nuclear-capable missile. A North Korean version could likely reach all of South Korea — and the 28,500 U.S. forces stationed there — and would be extremely hard to intercept. /gsg

ADVERTISEMENT
Read Next
Too many in Congo’s Ebola outbreak are dying at home
EDITORS' PICK
Cebu City closes its borders
BREAKING: 1,075 people in PH has coronavirus disease – DOH
Style and music journeys with Claudia Barretto
DILG to stranded workers: ‘Stay where you are’ until Luzon-wide quarantine is over
UP-PGH wards for COVID-19 patients finished in 5 days
IATF: Food firms to operate with 50% of workforce during Luzon quarantine
MOST READ
Pacquiao to seek probe on leaked private letter from Barangay Dasmariñas
Tootsy Angara bares neighbor wanted them out of village
McCoy bares devastating effect of failed romance with Elisse
What awaits medical volunteers in DOH drive vs coronavirus
Don't miss out on the latest news and information.