WASHINGTON – President Donald Trump has accused China of wanting to stall trade negotiations through the 2020 election in hopes of being able to negotiate with a more malleable Democratic president. 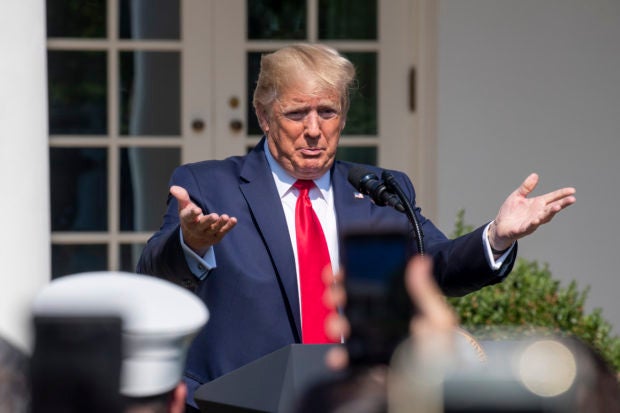 President Donald Trump welcomes first responders before signing H.R. 1327, an act ensuring that a victims’ compensation fund related to the Sept. 11 attacks never runs out of money, in the Rose Garden of the White House, Monday, July 29, 2019, in Washington. (AP Photo/J. Scott Applewhite)

Yet if re-elected, Trump threatened to get “much tougher” with Beijing.

“China would love to wait and just hope,” Trump asserted to reporters Tuesday.

“They would just love if I got defeated so they could deal with somebody like Elizabeth Warren or Sleepy Joe Biden…. They’ll pray that Trump loses. And then they’ll make a deal with a stiff, somebody that doesn’t know what they’re doing like Obama and Biden, like all the presidents before.”

Trump made his comments just as his trade representative, Robert Lighthizer, Treasury Secretary Steven Mnuchin and their Chinese counterparts began a 12th round of trade talks in Shanghai.

Separately on Twitter, Trump warned that “the problem with them waiting, however, is that if & when I win, the deal that they get will be much tougher than what we are negotiating now…or no deal at all.”

The world’s two biggest economies are locked in a trade war over U.S. allegations that Beijing uses predatory tactics — including stealing trade secrets and forcing foreign companies to hand over technology — in a drive to overtake American technological dominance.

Trump has imposed tariffs on $250 billion worth of Chinese imports, and China has counterpunched by taxing $110 billion in U.S. products.

Negotiators in Shanghai are also expected to discuss the fate of the Chinese telecommunications giant Huawei. The United States in May put Huawei, which U.S. officials see as a national security threat, on a blacklist barring it from receiving U.S. components. Trump has said that Huawei could be a bargaining chip in the trade dispute.

Talks had broken down in May after the United States accused the Chinese of reneging on earlier commitments.

Trump insisted that the trade war is hurting China more than the United States: In the April-June quarter, China’s economy grew at the slowest pace in at least 26 years.

“They’ve had a terrible year because of the tariffs,” Trump said.

Moments after suggesting that Beijing wanted to wait him out, Trump seemed to contradict himself by contending that “China is dying to make deal with me,” before adding, “but whether or not I’ll do it, it’s up to me. It’s not up to them. ” /gsg