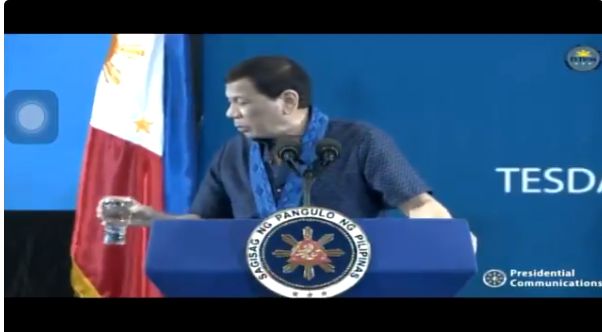 President Duterte: There’s a fly in my drinking glass.

MANILA, Philippines—After a cockroach crawled on the shirt of President Rodrigo Duterte in May, now it’s a fly’s turn to take the spotlight as he bothered the President and even landed on his glass of water.

Duterte was speaking at the launching of mobile app “911 TESDA” in Taguig City on Tuesday evening when he noticed that a fly has landed in his glass. He then asked his aides to give him bottled water instead

WATCH: President Rodrigo Duterte asks for a bottled water after a fly landed on his glass. @inquirerdotnet pic.twitter.com/zbM4vioZwk

Later in his speech, another fly buzzes near him while he was discussing his feud with priests.

Moments after, the fly apparently returned and the President threatened to slap it with a piece of paper containing his prepared speech.

On May 9, a cockroach landed and crawled on Duterte’s shirt during a campaign rally in Bohol.

Duterte’s aide tried to brush away the cockroach using a folder but the pest dashed its way to the front.

It got the President’s attention and eventually, Duterte took matters into his own hand, flicking the insect down to the floor and went on with his speech as nothing happened.