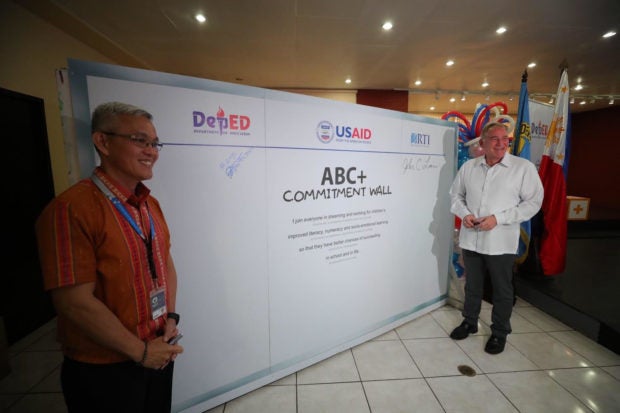 Department of Education Undersecretary for Curriculum and Instruction Diosdado San Antonio (left) and U.S. Embassy in the Philippines Chargé d’Affaires John Law (right) pose for a photo after signing the ABC + Commitment Wall following the launch of the Advancing Basic Education in the Philippines program in Pasig City on Tuesday (June 30, 2019). Photo courtesy of the Department of Education.

MANILA, Philippines — The United States has given P2 billion to aid the Department of Education (DepEd) in implementing innovative approaches to ensure quality early education to at least two million young students in the Bicol and Western Visayas regions.

The program, which was launched at the Bulwagan ng Karunungan at the DepEd Main Building in Pasig City on Tuesday, is dubbed as the ABC + Project: Advancing Basic Education in the Philippines.

The five-year program will be supported by the US Agency for International Development (USAID).

“Education has always been one of the big components of the work that AID is doing here and through their work with the Department of Education, they’ve identified one of the most important areas [and that is] obviously when kids are little,” U.S. Embassy in the Philippines Chargé d’Affaires John Law told reporters on the sidelines of the launch.

“When you can get them in their kindergarten years, in those very first years, if you can establish those good habits of reading, of literacy, of interest in mathematics as well as…social skills, kids are gonna have a successful educational experience,” he further explained.

The program will be implemented from July 2019 to June 2024 throughout schools in the Bicol and Western Visayas regions.

“The focus is on fundamental literacy—I think the challenge in Bicol and Western Visayas is we have so many languages—also fundamental mathematical literacy, numeracy, an ability to work with numbers because that opens up a whole world of science and technology as well,” Law said.

The said project, which would ensure access to quality education for children in areas of greater need, seeks to improve basic life skills of children in grades 2 and 3.

“This program is focused…in two regions to start off, but we’re really looking forward to have a tremendous impact on those initial years when kids are learning, that’s just gonna catapult them to success as they’re older, we believe,” Law said.

In achieving its goal, the project would invest in professional development and support for teachers to achieve improved instruction and learning delivery.

The program would also introduce innovative approaches to teaching materials development to make them available in a variety of languages.

“Indeed it takes a village to raise a child…Partnerships with various sectors of the community are essential to helping our children reach their maximum potential, together we put our stakes in the future of our children, transforming them, making them dream differently and achieve,” DepEd Assistant Secretary Salvador Manala III said in his closing remarks during the launch.

“We look at ABC+ as a potent tool and as a vehicle to improve basic life skills of our children and thus help us bring about a stronger society,” he added.