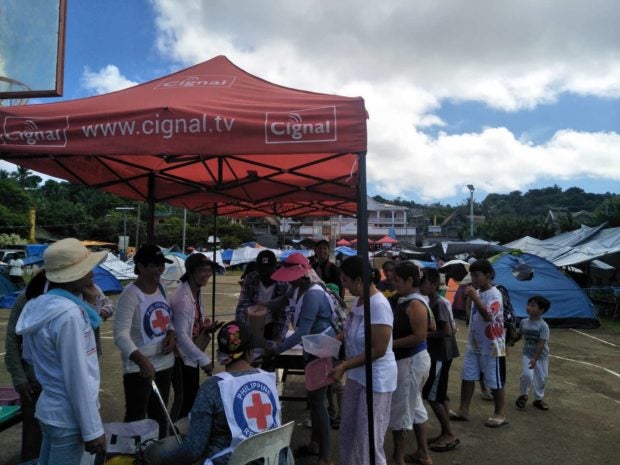 Red Cross members distribute hot meals for over 2,000 survivors who were displaced after twin quakes hit Itbayat town in Zambales on July 27.

MANILA, Philippines – The Philippine Red Cross (PRC) has extended its assistance to survivors of the twin quakes that hit Itbayat town in Batanes over the weekend.

In a statement on Tuesday, PRC said they distributed meals, roofing materials and water for over 2,000 earthquake victims who took shelter in tents in front of a Municipal Hall in Itbayat.

“We are assessing as we are giving. Right now we are focused on their immediate needs, but eventually, we will provide their long-term needs, such as houses,” Gordon said in a statement.

PRC’s welfare teams also extended psychosocial support for victims who experienced trauma due to the earthquake.

Nine people died while around 60 were injured after a magnitude 5.4 quake rocked Itbayat town on Saturday (July 27) morning. This was followed by a stronger magnitude 5.9 quake.