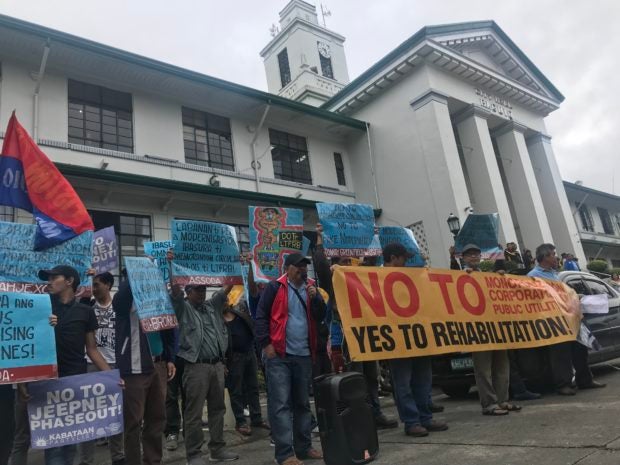 BAGUIO CITY –– Baguio jeepney drivers on Tuesday (July 30) marched to City Hall to submit a petition against the enforcement of the jeepney modernization here, as various companies displayed nine prototype vehicles that would purportedly replace jeeps that can navigate steep mountain slopes.

Asserting a 2018 City Council resolution objecting to the government’s omnibus guidelines for converting public utility vehicles, about 40 members of the group Piston submitted a new petition registering their opposition to the government program that they say is skewed in favor of transport industry groups, which could afford modern jeeps costing between P1.3 million to P2.3 million.

Led by George San Mateo, president of Piston (Pinagkaisang Samahan ng mga Tsuper at Operators Nationwide or United Organization of Drivers and Operators Nationwide), the marchers said assurances by government that each of them could pay their new jeepneys in seven years were false.

“Drivers’ average daily gross is P1,500. Deduct P750 spent on fuel and the P500 boundary if they do not own their vehicles, that leaves them barely P200 for their families,” said Gerry Diano, who drives a jeep serving Barangay Happy Hallow inside the Camp John Hay reservation. “What is left to pay loans?” he asked.

Mateo also said drivers feared they would simply be replaced by capitalists who would control mass transportation.

“We are not against modernization. What we can’t accept is how certain players will make money out of the program,” he said.

In their petition, Piston said each operator who joins a transport cooperative mandated by the new rules would need to earn P20,000 each month to pay for the amortization.

Each operator must raise P300,000 to play his or her obligation.

At least 11 modern vehicles, which have fuel-efficient and environment-friendly engines built for mountain terrain, were shown off at the City Hall grounds.

Some were built like small buses, which curious drivers said may not be able to circle Baguio’s narrow streets.

One of the proposed vehicles can carry the load of two jeeps, which would technically reduce the number of vehicles on the streets.

Baguio has traffic jam problems due to too many vehicles.

“But that means one more family with no job. They must raise for food on their tables not to pay loans,” said one of the protestors.