WHAT WENT BEFORE: China-based offshore gaming firms in PH 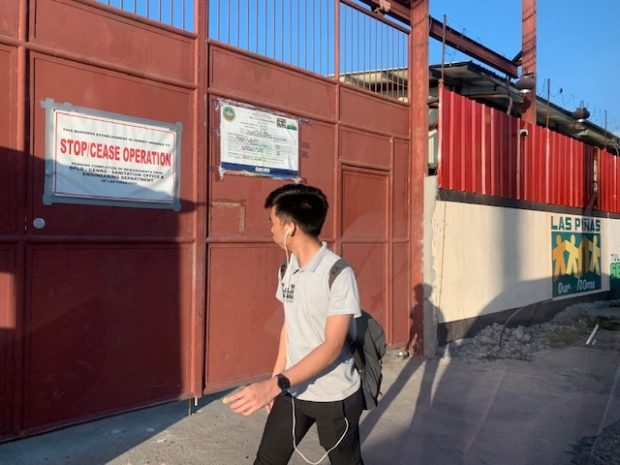 CLOSED A pedestrian walks past China Food City, a “Chinese only” food complex that was closed by the Las Piñas city government for operating without sanitation and other permits

MANILA, Philippines — Government authorities are ambivalent about the sudden presence of Chinese workers and the operation of China-based offshore gaming companies in the country.

The city governments of Parañaque, Las Piñas and Makati, for example, shuttered nearly 40 Chinese-owned or -managed restaurants in June for violating local ordinances on sanitary and operation permits and also for limiting their customers to Chinese nationals.

The Department of Finance (DOF) has decided to take advantage of their presence by forging an agreement with the biggest Philippine offshore gaming operator (Pogo) in order to collect P2 billion a month in withholding tax.

But the Philippine Amusement and Gaming Corp. (Pagcor) wants a gentler approach, warning that numerous deductions could compel Pogos to move their business to another country.

Meanwhile, one real estate company sees the Chinese presence as jacking up property sales and rentals, especially in the so-called Bay Area, the fancy term now used to refer to parts of Manila, Pasay and Parañaque near Manila Bay.

News reports have noted that almost all of the “Chinese only” restaurants padlocked by local officials are located beside or very near buildings that host Pogos based in China, where gambling is illegal.

Pogos have been described as either “casinos” providing online gaming services for China-based players or “call center-type operations.”

China Food City, a sprawling complex of food stalls in Las Piñas, was in the news last month after locals complained of being turned away by guards because the place catered only to Chinese nationals. A raiding team sent by the local government discovered that the food court did not dispose of food waste properly and that only one of the 30 stalls had a business license and a permit to operate.

According to the Bureau of Immigration, more than 3 million Chinese nationals arrived in the country from 2016 to 2018.

Their growing number is now cause for concern among southern Metro Manila communities. This is because their generous offers to pay rent for apartments, houses and condominium units by as much as triple the original rate are encouraging Filipino property owners to prematurely terminate lease contracts with local lessees in favor of “better-paying” Chinese workers.

Apart from residential units, Dom Fredrick Andaya, a director at the real estate company Colliers International Philippines, was quoted in a Reuters report as saying that Pogos “came in and saved the office market.”

“We would have had double-digit vacancy rates [in office spaces] by 2017 if Pogos did not come,” he said.

KMC Savills Inc., another real estate service firm, was quoted in an Inquirer report as saying that demand for office space in the Bay Area was driven by Pogos and other outsourcing companies. Pogos alone took 76,000 square meters of office stock in the area in 2018.

“We project the Bay Area’s office stock to exceed 1 million sq m by the end of 2020, four times higher than the business district’s leasable stock in 2016 prior to the influx of offshore gaming firms from China,” said Joey Roi Bondoc, Colliers research manager, in the Inquirer report.

The DOF has turned the presence of these foreigners into a tax bonanza by entering into an agreement with the largest Pogo in the country by imposing withholding tax on its 100,000-130,000 employees.

The Bureau of Internal Revenue (BIR) expects to collect an estimated P2 billion a month, or P24 billion a year, from the agreement. Before Finance Secretary Carlos Dominguez III’s dialogue with the Pogo owner, such levy arrangements were nonexistent even in the regulatory framework for online gaming operators that Pagcor has established.

Dominguez also said the foreign employees will be required to pay membership dues to the Social Security System and the Home Development Mutual Fund (Pag-Ibig).

To date, Pagcor has licensed 55 Pogo operators but fewer than 50 are in business as some licensees were unable to raise the capital required by Philippine law.

Pagcor chair Andrea Domingo pointed out that Pogos had contributed P11.9 billion in gaming revenues between 2016 and 2018, up from only P56 million previously.

In a speech at the Phil-Asian Gaming Expo in Pasay, Domingo cautioned against “overtaxing” the Pogos lest their owners move to Cambodia, Vietnam or Laos.

“[Thanks to Pogos, there’s also] the real estate boom, and the boom of services like restaurants, theaters and entertainment. If you kill [Pogos] over unreasonable steps, then you lose everything,” she said.

But Sen. Joel Villanueva, in a statement issued before the opening of the 18th Congress, said Pogos were “causing a lot of stress in the real estate market, to the detriment of Filipino businesses and workers renting in urban areas to be near their workplaces.”

There is “very little benefit to Filipinos and our economy” from Pogos and Chinese workers, he said. “[W]hile analysts hedge their bets in the growing offshore gaming operations sector, it is actually less beneficial to the domestic economy.”

Villanueva also said no new jobs had been created for Filipinos because the Pogo industry required native Chinese speakers to deal with clients in China.

Besides, the senator noted, it took the government three years before it began collecting taxes. “We are already set back at least P60 billion in foregone revenue,” he pointed out. —Cathy Cañares Yamsuan